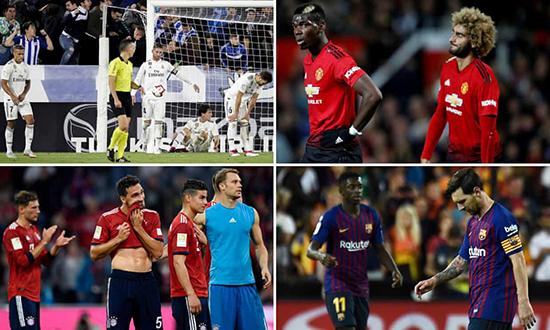 Bayern Munich, Manchester United, Real Madrid and Barcelona have won 26 European Cups between them. You wouldn’t know it from their form

By Martin Laurence for WhoScored

It was a weekend of shock results across Europe’s major leagues, with the Bundesliga and La Liga in particular throwing up more surprises. Two titans of the game fell to equally startling defeats on Saturday evening – just as Manchester United were avoiding one of their own at Old Trafford.

There was a sense of disbelief from fans at Old Trafford when United went 2-0 down inside 10 minutes to a Newcastle side who had not won all season. It took three players who have been marginalised by José Mourinho this season – Juan Mata, Anthony Martial and Alexis Sánchez – to turn the atmosphere from stunned silence to raucous noise and ensure United avoided dropping into the bottom half of the Premier League table.

United go into the international break eighth in the Premier League – between Wolves and Watford – but their plight this season fits into a broader theme around Europe. Bayern Munich’s recent malaise is perhaps the most surprising. Having romped to four comfortable victories to start their campaign – not to mention their emphatic 5-0 victory in the German Super Cup – the wheels are beginning to rattle at the Allianz Arena.

Everything was coming up rosy for Niko Kovac in the first six weeks as head coach, but the Croatian is feeling the pressure now after four consecutive matches without a win. The real concern is that three of those games have been at home. They lost 2-0 at Hertha Berlin last weekend and then were beaten 3-0 at home by Borussia Mönchengladbach on Saturday, their heaviest defeat in the Bundesliga in more than four years. The last time Bayern lost two league games in a row was May 2015, when they had already wrapped up the title. They have lost as many Bundesliga games in the last 10 days as they did in the whole of the 2015-16 or 2016-17 seasons. Bayern have dropped to sixth in the table, four points behind league leaders Borussia Dortmund.

While Bayern were being humiliated in Munich, the European champions were having similar difficulties against Alavés. Real Madrid struggled to break down a staunch defence and then disaster struck in the 95th minute when Manu García scored a late winner for the hosts. Real Madrid have now lost three of their last four matches, hardly a great record for new manager Julen Lopetegui.

The timing of Lopetegui’s appointment on the eve or the World Cup came as a huge shock but the choice seemed logical for the club. He had a superb record with Spain’s senior side until his remarkable departure. The team had played some breathtaking, attacking football under his watch and he had worked closely and successfully with a number of Real Madrid players while in the international set-up. Again, all seemed well early on in his reign, with Madrid scoring 10 goals in three consecutive league wins to start the season, with both Gareth Bale and Karim Benzema stepping up to fill the void left by Cristiano Ronaldo.

However, things have gone awry quickly. Real Madrid have not scored in four matches – more than 400 minutes. Their only comfort is the reigning league champions, Barcelona, are also struggling. Barcelona have not won any of their last four league games. Their lack of form is perhaps less concerning – as they have scored in all four games – but this is their longest run without a victory since the 2015-16 campaign.

The top six in La Liga are separated by just two points. That’s a stark contrast to this time last season, when Barça were four points clear of second place and eight in front of the team in sixth. Sevilla are now top of the league, despite the fact they picked up just four points from the first 12 available this season. They are the only team in the league with a win rate above 50%. Their tally of 16 points is exactly same as they had after eight matches last season, when they sat fifth in the table. In a bizarre turn of events, just 11 points separate top to bottom after eight matches; the gap was 21 points last season.

Manchester United, Bayern Munich, Real Madrid and Barcelona are struggling but it could be worse. Monaco’s fall down the Ligue 1 table has been drastic this season. Having won the title two years ago and finished second last season, they are now entrenched in the bottom three after a limp 2-1 defeat at home to Rennes on Sunday.

A constant cycle of new faces in the team finally appears to have caught up with them, with the sales of Thomas Lemar, João Moutinho and Fabinho this summer having a real impact. It will be even more frustrating to the Monaco fans that Fabinho, who ensured their side was not overrun in midfield, can’t get a game since his move to Liverpool, with Monaco crying out for some solidity and leadership in the middle of the park. Monaco’s 2-1 home defeat to Rennes this weekend was their fifth loss of the season after just nine matches. They would have to win all 29 of their remaining fixtures to match PSG’s league-winning tally of 93 points from last season.

With Manchester City, Juventus and PSG all leading the leagues they won back in May it might seem like business as usual among Europe’s elite, but things aren’t quite so predictable this season.