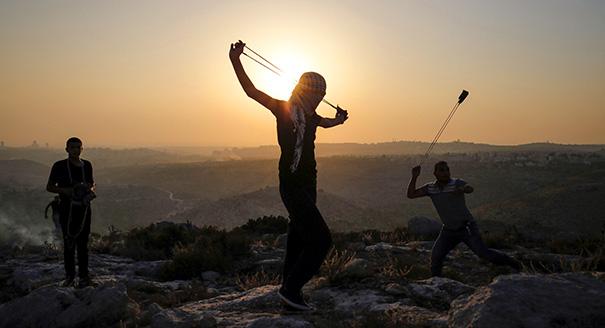 The idea that Israel can “win” against the Palestinians is absurd, therefore dangerous.

Since April, there has been in the U.S. Congress a group that calls itself the Congressional Israel Victory Caucus. The caucus, a collection of pro-Israel representatives, argues, “[I]t is time to give up on post-modern notions of enrichment and return to the proven concept of victory. Perhaps it’s time for our ally Israel to win, and time for the Palestinians to have a chance to improve their lives.”

This corresponds roughly to the philosophy currently being pursued by the U.S. envoys in charge of negotiating a settlement between Israelis and Palestinians. Through a series of unilateral steps in recent months—recognition of Jerusalem as Israel’s capital, the cutoff of funding to the United Nations Relief and Works Agency and a push to vastly reduce the number of recognized Palestinian refugees, as well as the closing of the Palestine Liberation Organization offices in Washington—the United States is seeking to ensure that Palestinians accept that they are the losers in their conflict with the Jews. However, this effort will lead to precisely the opposite consequences than those sought by its promoters.

What’s past is prologue, so the Trump administration and the government of Prime Minister Benjamin Netanyahu are laying the groundwork for an irresolvable problem. Israel and its friends in America may think they are winning the argument on the Palestinians, but it’s an illusion to imagine that they can make millions of Palestinians roll over and surrender because this satisfies their preferred narrative.

The probable outcomes are well-known at this stage. Palestinians will soon be a demographic majority in Israel and the occupied territories, forcing one of three alternatives on the Israelis if a viable two-state solution is abandoned: to pursue their repression indefinitely while continuing to uphold a system fundamentally weighed against the Palestinians under occupation; to engage in the mass expulsion of Palestinians to neighboring Arab countries; or to give Palestinians equal civil rights, which could eventually open the door to their becoming citizens of a single binational state, which Jews reject as posing an existential threat to them.

There is no fourth way, and even the second and third options are hardly conceivable in light of the monumental costs, moral or demographic, they would impose on Israel. But if repression is the sole option, then it means that Palestinians, denied all other possibilities, will view violence as the only way to achieve their political objectives. The Trump administration’s foolish efforts now to force Palestinians to accept their own defeat can only guarantee this, because it means the route of worthwhile negotiations is nonexistent.

Much has been said about how younger Palestinians are no longer focused on securing a Palestinian state, but are more keen to gain their rights in whatever framework they can. However, what does that really imply if all the choices Israel has left itself lead to a denial of Palestinian rights? As Palestinians become more conscious of their demographic weight, the temptation to revolt again will certainly rise.

Palestinians may not be prepared for violence today, but they will again be one day unless they see another path offering them better results. Israel will retaliate, echoing the familiar accusation that Palestinians only understand the stick, but the context will have changed by then. Having gained as much as they have through their American benefactors, Israelis will not be regarded sympathetically as they were before. That is another result of American vindictiveness in recent months, as they have cut off assistance to and targeted the most vulnerable and impoverished Palestinians. Many watching this will no longer be ready to blame the victims.

The arrogance of those pushing for affirmation of an Israeli victory will ultimately work against Israel. There can be no possible victory, whether on the Israeli or the Palestinian side, for as long as the two peoples are condemned to live alongside one another. This reality has been repeated so many times that it is remarkable how such a statement of the obvious continues to elude policymakers.

For a lesson from the past, it is worth going back to a much-discussed Haaretz interview with Israeli historian Benny Morris in January 2004, conducted by Ari Shavit. Morris, one of the main revisionist historians in Israel, who wrote a ground-breaking book on the birth of the Palestinian refugee problem, discussed the rationale behind the expulsion of Palestinians by Zionist forces in the war of 1948. For Morris, the decision on population “transfer” was taken by the Zionist leader David Ben-Gurion. When asked whether Ben-Gurion bore responsibility for a policy of mass expulsion, and was, as Shavit put it, a “transferist,” Morris replied:

Of course. Ben-Gurion was a transferist. He understood that there could be no Jewish state with a large and hostile Arab minority in its midst. There would be no such state. It would not be able to exist.

While Morris was talking about 1948, it’s difficult not to transpose what he said to the situation today. Indeed, not much has changed in the fundamental attachment of both peoples to the land. Yet the current Israeli leadership has done everything to keep a hostile Arab population—one that will soon be a majority—in its midst. That’s why the notion of an Israeli victory seems so absurd, and why peace between Israelis and Palestinians can only come without victory.