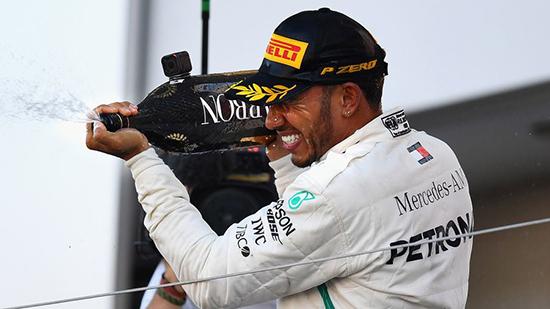 Lewis Hamilton moved 67 points clear of Sebastian Vettel in the Formula One Championship with just four rounds remaining following his win in Japan on Sunday.

The British driver will now clinch his fifth world title at the next round in Austin on October 21, Texas…

If Hamilton is seventh or lower, the championship will continue to Mexico (October 28). The other Grand Prix are in Brazil (November 11) and Abu Dhabi (November 25).

Sebastian Vettel said in the build-up to Sunday’s race that he is not a fan of the “now or never” approach but on lap eight the Ferrari driver attempted an unlikely move on Max Verstappen at the high-speed Spoon curve, ploughed into the side of the Red Bull car and ended up off the track.

Ferrari have had the best car for large parts of this season, but Vettel has been out-classed, out-foxed and out-gunned by Hamilton and has a double-figure mistake tally across this season and last. With impressive rookie Charles Leclerc joining Ferrari next year, could this be the beginning of the end for Vettel?

Vettel’s failings should take nothing away from Hamilton’s remarkable campaign. The former won four consecutive championships with Red Bull but it is no coincidence he has been found wanting when in direct competition with Hamilton.

As the British driver closes in on championship number five, the credentials surrounding his status as Formula One’s greatest of all time grow ever stronger.

He has 12 more pole positions than any driver in history, is now just 20 wins off Michael Schumacher’s record and is poised to move within two of the German’s championship tally which some said may never be beaten – to say nothing of his exploits off the track, such as launching a global clothing line and collaborating on a song with Christina Aguilera.

The Hamilton v Rosberg story felt as though it had reached its natural conclusion when the German ended his long-running losing streak to his arch-rival and won the 2016 World Championship. Perhaps fearing he may never beat Hamilton again, Rosberg retired aged 31.

But given Vettel’s failings and Valtteri Bottas’ limp showing, does the sport need Rosberg back? He has been the only driver to ever get under Hamilton’s skin, while Bottas’ role as a Mercedes team player/wingman/all-round ‘Mr Nice Guy’ is a plotline the sport could arguably do without.

Still only 33, Rosberg is hardly over the hill and while there is probably more chance of Bernie Ecclestone returning as the sport’s governor than Rosberg ending up back in a Mercedes cockpit, it would certainly make for a more compelling 2019 campaign.

McLaren had the slowest car in Japan. Yes, McLaren, Britain’s biggest and most successful team.

Zak Brown, McLaren’s American CEO, expected last January that the orange cars would be battling Red Bull this year. How could he have got it so wrong?

In recent years it was inconceivable that McLaren – without a race win since Hamilton left in 2012 – would never triumph again, but it now looks a real possibility.

Verstappen was unhappy to be given a five-second penalty for running off at the chicane and re-joining the track in an alleged “unsafe manner”. But, as Verstappen alluded to, should Kimi Raikkonen have been quicker to react to the Red Bull driver’s mistake by adopting a different line?

It seems unrealistic for Verstappen to be expected to yield to half the field before returning to the circuit. Vettel then crashed into the side of Verstappen following a wild move, but faced no sanction. No wonder Verstappen may think it’s one rule for him and another for everyone else.