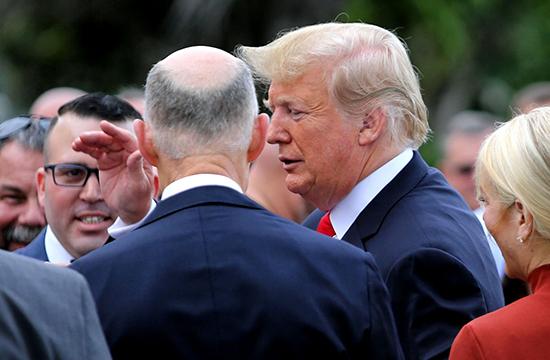 U.S. President Donald Trump expressed concern on Oct. 8 over the disappearance of Saudi journalist Jamal Khashoggi, who was last seen visiting the kingdom’s consulate in Istanbul.

“I am concerned about it. I don’t like hearing about it. Hopefully that will sort itself out. Right now nobody knows anything about it. But there’s some pretty bad stories going around. I do not like it,” Trump told reporters on the White House lawn as he was returning from a trip by helicopter to Orlando, Florida.

Later in a tweet about the reports, Vice President Mike Pence said, “Violence against journalists across the globe is a threat to freedom of the press & human rights. The free world deserves answers.”

U.S. Secretary of State Mike Pompeo called on the Saudi government to support a “thorough investigation” into the matter.

“As the President has conveyed, the United States is concerned by his disappearance. State Department senior officials have spoken with the Kingdom of Saudi Arabia through diplomatic channels about this matter.

“We call on the government of Saudi Arabia to support a thorough investigation of Mr. Khashoggi‘s disappearance and to be transparent about the results of that investigation,” he said in a statement.

Riyadh must provide “honest answers,” Graham said on his Twitter account, adding his position is shared by fellow Senators Bob Corker, a Republican, and Ben Cardin, a Democrat.

“We agree if there was any truth to the allegations of wrongdoing by the Saudi government it would be devastating to the US-Saudi relationship and there will be a heavy price to be paid ? economically and otherwise,” Graham said.

“Our country’s values should be and must be a cornerstone of our foreign policy with foes and allies alike,” he added.

Khashoggi, a journalist and columnist for The Washington Post, has been missing since he entered the Saudi consulate in Istanbul on Oct. 2.

Earlier Oct. 8, Turkish President Recep Tayyip Erdoğan urged the Saudi consulate to prove whether or not Khashoggi exited the building after entering, saying the consulate officials “can’t get away with [simply] saying ‘he left the building’.”

Turkish police investigating the case said Oct. 6 that 15 Saudis, including several officials, arrived in Istanbul on two planes and entered the consulate while Khashoggi was inside.

Istanbul prosecutors are investigating the incident, while the consulate said on Twitter that it was working in coordination with Turkish authorities.