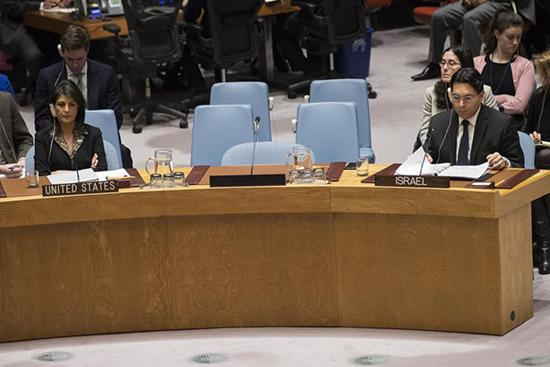 “Rest assured, Iran’s regime is terrified about who Trump/Pompeo will appoint next,” noted human rights activist and commentator Heshmat Alavi.

“Sad news for Israel,” tweeted retired IDF spokesman Peter Lerner. “Nikki Haley’s role in the final destruction of the Israeli-Palestinian peace process, and her shameful and racist smearing of Palestinian protesters by Israel during the ongoing Grand Return March will always define my opinion of her,” tweeted writer Iyad el-Baghdadi. Across the Middle East, reaction to reports that US Ambassador to the United Nations Nikki Haley is stepping down were as divided as the region.

Predictably, those supportive of the Palestinians and critical of US policy on Iran were critical of Haley, while those who tend to oppose the Iranian regime or sup- port Israel were shocked at her leaving. Haley was a strong voice against Iran’s policies in her speeches. In December 2017 she unveiled the wreckage of an Iranian Qiam ballistic missile at a speech, showcasing Iran’s involvement in Yemen.

Her departure comes as the US is dealing with a Saudi Arabia-Turkey crisis over missing journalist and former Riyadh insider Jamal Khashoggi that may involve a UN investigation or UN condemnation. The US is also seeking to pressure UNRWA, UNESCO and the UN Human Rights Council, and has withdrawn from various international bodies and treaties, including a treaty of Amity with Iran and a protocol in the Vienna Convention.

“Rest assured, Iran’s regime is terrified about who Trump/Pompeo will appoint next,” noted human rights activist and commentator Heshmat Alavi. He called her a champion supporting the people of Iran and noted her strong words against the Assad regime and Russia regarding their policies in northwest Syria. The Special Monitoring Mission to Syria, which covers the conflict there, tweeted that they hoped the new UN ambassador “will bring [a] more positive agenda to the international community from Washington.”

Ali Ahmadi, who follows US policy and Iran, was nonplussed by descriptions of Haley as a “moderate.” How was she moderate, he asked. “Not being as much of an agitator as Bolton,” he wondered. “Haley looks really marginalized,” He tweeted. Ali Younes at Al-Jazeera agreed that Haley was “never a voice of moderation” in the Trump administration.

THOSE CRITICAL of Washington’s policy pressuring Tehran, or who support Iran, are celebrating Haley’s departure. Journalist and academic Naveed Ahmed notes that “the Anti-Khamenei lobby is in deep shock, as if orphaned, because Nikki Haley resigned.” Suhasini Haidar at The Hindu argued on Twitter that the resignation might be because the US sees its Iran policy as having failed. “Haley had been pretty tough on India during her visit, but India, too, has decided like Russia, Turkey [and] China not to ‘zero out,’” an apparent reference to avoiding the pressure of Iran sanctions.

Haley was one of the administration’s early stalwarts and also a consistent voice regarding its policies. She was tough on Iran from the beginning, signaling the overall shift that Trump wants. She was also a frequent critic of Palestinians. “I will not shut up,” she told Palestinian negotiator Saeb Erekat, responding to claims she should not critique Palestinian President Mahmoud Abbas. She criticized the UN Security Council for not condemning rocket fire from Gaza. The PLO accused her of leading an “anti-Palestinian crusade.” As a result, the Trump administration closed the PLO’s office in Washington.

It was never entirely clear in the region if Haley had the influence to move the administration, or if she merely happened to represent its more hardline views on Iran and other issues. Once Secretary of State Mike Pompeo and National Security Advisor John Bolton took their positions earlier this year, and White House Chief of Staff John Kelly sorted out the presidential residence, Haley’s position became part of concert singing in unison.

There were some troubles though. In April, she was rumored to be “ahead of the curve” on new Russia sanctions, with the administration not fully in line with her views. “With all due respect, I don’t get confused,” she said. Trump administration viewers were surprised at her breaking ranks. In September, the administra- tion reportedly “disowned” a plan by Haley to hold a meeting at the UN focused on Iran. These types of con- troversies fed impressions in the Middle East that team Trump was not always sure of where it was going on its policies, from Syria to the Gulf or Iran.

Haley was among the administration’s highest profile woman and a rare face of diversity among Trump’s men. When she was first rumored for appointment in November 2016, Reuters said that she had “little diplomatic heft.” Two years later, there is no doubt in the world, and the Middle East in particular, that she did have weight on the most important foreign policy issues. Whoever seeks to replace her will likely find her shoes too big to fill.