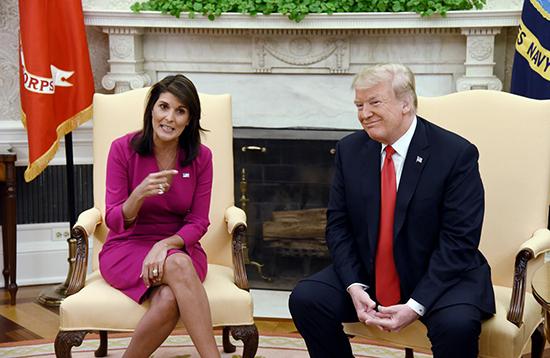 Nikki Haley has resigned from her post as the U.S. ambassador to the United Nations, leaving behind a troubled relationship between the country’s current leadership and the multinational body.

She did not reveal the reason for her departure, but called the job “an honor of a lifetime” during a televised address Tuesday alongside President Donald Trump. She added that she had “no personal reason” for leaving and that “It’s very important for government officials to understand when it’s time to step aside.”

“Look at what has happened in two years with the United States on foreign policy. Now the United States is respected,” Trump said Tuesday. “Countries might not like what we do, but they respect what we do. Now if we say we’re going to do something, we follow through…whether it’s the chemical weapons in Syria, whether it’s with NATO and other countries have to pay their share, whether it’s the trade deals, which has been amazing. They get that the president means business and we follow through with that.”

Though the U.S. has often sought the backing of the international community in making major decisions, it has not allowed an absence of this support to persuade it from taking unilateral action. Here are some of the more notable instances in which Haley found herself isolated at the U.N.

The Paris Climate Agreement was adopted as part of the U.N. Framework Convention on Climate Change in 2015 and, by the time Trump came to office in January of last year, every country on Earth had signed the deal with the exceptions of Nicaragua—which felt the deal did not go far enough—and Syria—which was undergoing a vicious civil war. Both countries have since reconsidered. Trump has expressed skepticism toward the theory of climate change in the past and his decision to pull the U.S. out of the agreement last June deeply frustrated even close allies such as France, whose president told the U.N. General Assembly last month that the country “will no longer sign commercial agreements with powers that do not respect the Paris accord.”

Following the U.S. exit, Haley appeared to temper criticisms toward the administration’s non-traditional views of climate change, arguing in an August 2017 interview with the Today Show that, “Just because we pulled out of the Paris accord doesn’t mean we don’t believe in climate protection” and affirming that climate change is “real.”

One of the most consistent U.S. stances at the U.N. during Haley’s time was staunch support for Israel. The only Jewish-majority state in the world has long argued that it receives unfair treatment at the U.N., where a number of Arab and Muslim states have criticized Israeli treatment of Palestinians and occupation of land globally recognized as Palestinian. Since its 1948 founding, successive U.S. administrations have defended Israel against perceived bias, but one of the last straws appeared to be a United Nations Educational, Scientific and Cultural Organization (UNESCO) resolution in July that labeled the Old City of Hebron in the West Bank as a Palestinian World Heritage Site and not an Israeli one.

“The purpose of UNESCO is a good one. Unfortunately, its extreme politicization has become a chronic embarrassment,” Haley said at the time of the U.S. exit last October.

In another show of support for Israel, the U.S. moved to defy decades of international consensus on the disputed status of Jerusalem to recognize the sacred city as the capital of Israel. The city, claimed by both Israelis and Palestinians as their capital, was initially given international status but was split between Israel and Jordan after the first Arab-Israel conflict. Israel annexed the Arab-controlled eastern half after another war in 1967 and annexed it in 1980, effectively giving Israel control of the entire city. Jordan was left with administrative duties over Islamic holy sites such as the Al-Aqsa Mosque and the Dome of the Rock.

When Trump announced in December that he would not only proclaim Jerusalem as the capital of Israel, but also to move Washington’s embassy from Tel Aviv to the holy city, the U.S. was forced to use its privilege as a permanent security council member to veto a resolution condemning the decision. A subsequent resolution considering Trump’s move “null and void” in the General Assembly passed 129 to nine, and saw major U.S. allies defy Haley’s threat to pull financial assistance. After the vote, she invited the 64 countries that voted “No” or abstained to a “friendship” party.

The forging of the Iran nuclear deal between the administrations of former President Barack Obama and Iranian President Hassan Rouhani was widely hailed as a diplomatic milestone and jointly signed by China, France, Germany, Russia and the United Kingdom. The accord saw Iran agree to restrict its nuclear production in exchange for a lifting of sanctions, but U.S. conservatives—along with bitter Iran foes Israel and Saudi Arabia—felt it did not go far enough to restrict Iran’s other support for armed movements abroad and ballistic missile development.

Trump promised to renegotiate or scrap the deal on the campaign trail and, after taking office, he pushed his officials to find instances of Iranian non-compliance. Though his own State Department and the International Atomic Energy Agency found Tehran to be abiding by the agreement and despite pleas from the deal’s other signatories, Trump announced in May that the U.S. was officially out of what Haley called a “terrible deal that only allowed Iran’s bad international conduct to worsen.”

The Human Rights Council was founded in 2006, but the U.S. did not join until 2009, under Obama. Like other U.N. agencies, it has been accused by the U.S. of bearing prejudice against Israel and of giving a platform to authoritarian countries otherwise criticized for their human rights records. After the council moved to blame Israel for mounting Palestinian deaths amid violent Gaza demonstrations demanding a right to return to lands they were displaced from and protesting the U.S. embassy move to Jerusalem, the U.S. in July became the first country to ever voluntarily leave the organization dubbed a “cesspool of political bias” by Haley.

“Human rights abusers continue to serve on, and be elected to, the council,” Haley said at the time. “The world’s most inhumane regimes continue to escape its scrutiny, and the council continues politicizing scapegoating of countries with positive human rights records in an attempt to distract from the abusers in its ranks.”