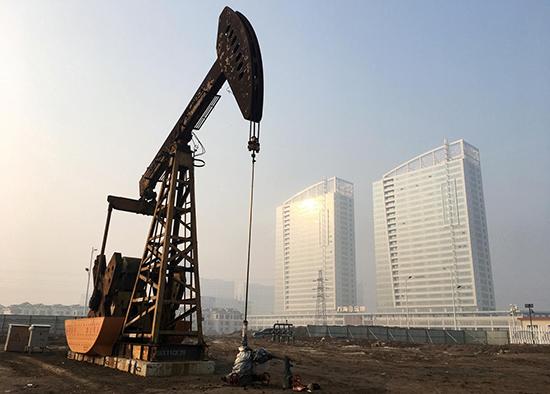 TOKYO (Reuters) – Oil prices edged lower on Wednesday after the IMF lowered its global growth forecasts but prices were supported as Hurricane Michael churned toward Florida, causing the shutdown of nearly 40 percent of U.S. Gulf of Mexico crude output.

The International Monetary Fund downgraded its global economic growth forecasts for 2018 and 2019 on Tuesday, potentially tempering demand for oil and its products.

Trade tensions and rising import tariffs were taking a toll on commerce, while emerging markets struggle with tighter financial conditions and capital outflows, the IMF said.

“Prices are peaking at the most opportunistic time given waning global growth narrative,” said Stephen Innes, head of trading APAC at OANDA in Singapore.

In the United States, nearly 40 percent of daily crude oil production was lost from offshore U.S. Gulf of Mexico wells on Tuesday because of platform evacuations and shut-ins ahead of Hurricane Michael.

Oil producers evacuated personnel from 75 platforms as the storm made its way through the central Gulf on the way to landfall on Wednesday on the Florida Panhandle.

The facility is the only U.S. port able to fully load and unload tankers with a capacity of 2 million barrels of oil.

Companies turned off daily production of about 670,800 barrels of oil and 726 million cubic feet of natural gas by midday on Tuesday, according to offshore regulator the Bureau of Safety and Environmental Enforcement.

Iran’s crude exports fell further in the first week of October, according to tanker data and an industry source, as buyers sought alternatives ahead of U.S. sanctions that take effect on Nov. 4.

Industry and government data on U.S. crude inventories will be delayed by one day this week because of Monday’s U.S. Columbus Day holiday. The American Petroleum Institute is due to release data on Wednesday, while the U.S. Energy Information Administration is due to publish on Thursday.