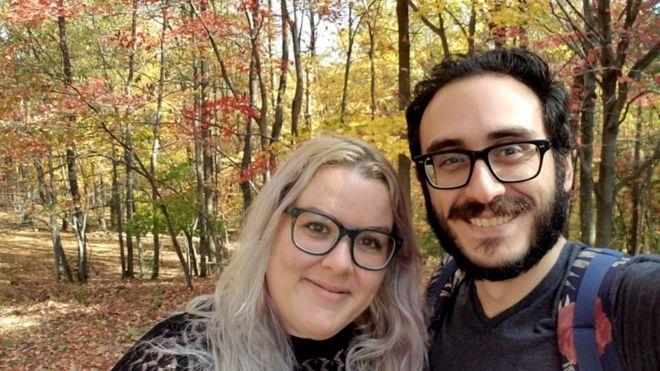 If you’re married and a millennial, then congrats are in order – the chances are your relationship will last longer than your parents’.

Between 2008 and 2016 the divorce rate in the US fell by 18%, according to a report from the University of Maryland.

The author put it down partly to people born between 1980 and the mid-1990s getting divorced at a lower rate than their baby boomer parents.

“Marriage has become more selective, and more stable, even as attitudes toward divorce are becoming more permissive,” the report suggested.

Millennials are three times less likely to marry than their grandparents, but those who do tie the knot appear to be staying together.

So what’s the key to millennial marital bliss? Five couples in the early stages of their marriages tell us their love stories.

Like many people we spoke to, Mehmet Alpaslan and his wife were together for several years before they married in 2016.

After a year’s long-distance relationship in 2013, they moved in together when Mehmet, an astrophysicist, moved to California where Jacquelyn lived.

Religious and social norms used to make marriage virtually compulsory and – even recently – living together before marriage could raise some eyebrows.

But now that many communities accept long-term co-habitation, why bother getting married?

“We’re best friends, and wanted to spend the rest of our lives together.

“That being said, we certainly were also aware of the legal benefits that married couples get (insurance benefits, better tax rates, etc.),” Mehmet explains, echoing the pragmatism expressed by other millennials we spoke to.

The couple say that establishing and expressing equality, even on their wedding day, was very important to them.

“It helps our marriage flourish. We even walked down the aisle together!”

Compared to most couples we spoke to, Cody Andrus and Alex Lawrence have been together for a long time.

After falling in love at Fresno State college in 2004, they got married seven years ago. They were one of the first same-sex couples to marry in New York.

“We wanted to symbolise our commitment to each other in front of people we love,” Cody explains.

“As gay people, we had a chance to define what marriage is to us. We weren’t as bound by gender roles or pressure to be and act a certain way. There was a lot of freedom in that.”

The practical difference between living together and being married is virtually non-existent but the feeling is “huge” and means they share more of life’s tasks and duties, he adds.

Like Mehmet and Jacquelyn, they believe millennials emphasise “respect and equality” and that more people are content to wait until they meet someone who can provide that.

“Marriage means sharing your life and love with another, and at times putting someone else’s happiness before yours. It’s about finding someone to experience this crazy life with.”

By the time she turned 30, Jenny Chan Greene had been through some “tumultuous” relationships, so she made a list of what she wanted in a partner – “boisterous, sociable, and funny.”

Months after she met Zack Greene in 2013, she carefully considered whether they should live together: “I had read that relationships that slid into cohabitation without true intention would end poorly,” Jenny explains.

Having the independence and financial means to chart the course of their relationships marks out many millennials from previous generations.

“It was crucial in helping me find someone I could respect, and could demand respect from. We joke that as a feminist, I don’t need a man but have one because I wanted him specifically,” she says.

“Dating apps cycle people through matches very quickly and expose them to many more varying types and personalities. I feel that many modern marriages start later, when people have had a chance to learn from failed relationships,” Jenny suggests.

The couple say marriage, rather than long-term cohabitation, was something they “needed”.

“We wanted a ceremony and vows made to each other in front of our most treasured people. Some people are fine without labels, but in this age of “hooking up” and “swiping”, defining our relationship reminds us that this is steadfast.”

That commitment helps them get through hard times or disagreements.

“It’s important to recognise when you need help. When Zack and I started to fight more often, we went to a therapist, and it helped us to address concerns before they became insurmountable.

“Being married helped us to remember that we respect each other, and that communicating, although much less convenient than being mad or upset, is the key to resolving our differences.”

Helena and Kelly Carvalho-Lewis met online when Helena lived in Brazil and Kelly in New York.

After eight months, Helena moved to the US and a month later they got married.

“We got married because we are hopelessly in love. Neither of us is religious, but spirituality and the idea that we were destined to find each other guided us.”

Helena says their wedding ceremony in Brazil, rather than the legal ceremony in the US, is what really changed their relationship.

“I believe in the importance of rituals. A marriage is making a public commitment, of course it doesn’t mean it will work, but you are promising to try. A long-term relationship you are still not sure, not ready to make that final commitment.”

Although they have been married for just 18 months, they feel they have some guidelines for making it a success.

“Respect is so important. Consider the other person’s feelings, wishes, and dreams as much as you consider your own. And don’t let small things turn into big things.”

Natalie Seale believes she and Quincy were led to one another by destiny.

They met seven years ago in Edinburgh, when a friend introduced them. Natalie is British and Quincy is from Texas, so, as they both travelled a lot, they couldn’t live together before their wedding in 2016.

Their Christian faith and spirituality was a key reason for marrying.

“Christian marriage gets a bad rep from many people, but when you consider marriage as a “covenant” – in a very literal sense; a new start, a new promise, a new family that joins people together – its meaning is very deep,” Natalie explains.

They believe their independence and life experiences makes their relationship different to their parents’s generation.

“There is no “growing up together” in our marriage, just growing. We were both successful and accomplished when we got married, and had a real sense of our own identity” says Natalie.

“A marriage is much stronger when each partner allows themselves to be themselves, and love another person, just as they are, and for everything they still aspire to be.”