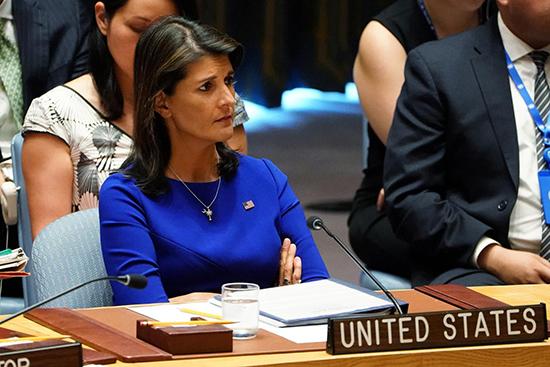 From bullying countries into voting in line with Washington to proclaiming that the US and Russia will never be friends, retiring US ambassador Nikki Haley has said a lot of eyebrow-raising things at the UN. Here are some of them.

US President Donald Trump and Haley seem to be parting on very good terms, with Trump hinting she’ll still have a role to play. Though Haley initially opposed Trump’s candidacy, she came around to eagerly defend her boss. After world leaders laughed during Trump’s UNGA speech praising his own achievements last month, Haley suggested it was actually a sign of respect and appreciation of his honesty.

I deal with these leaders every single day. I know exactly how they think. Do they love America? No. Do they respect America? Now they do. When he said that, they love how honest he is, and it’s not diplomatic, and they find it funny.

‘Mess with Israel – you’ll mess with US’

Israel seems to be most upset by Haley’s resignation from her UN job, since the envoy for Washington often ended up championing Israeli interests at the world body. Statements like this one perfectly explain Tel Aviv’s grief:

“It was abusive, how bad the international community was to Israel. It reminded me of a kid being bullied in the playground… I just wasn’t going to have it. It was just so upsetting to see, that I just started yelling at everybody…”

Prime Minister Benjamin Netanyahu:
“I would like to thank Ambassador @nikkihaley, who led the uncompromising struggle against hypocrisy at the UN, and on behalf of the truth and justice of our country. Best of luck!” pic.twitter.com/Lr6IvkM5U9

The US envoy was also never shy to pressure the UN member states into voting the way Washington saw fit. The most notable example of such extortion was the vote on recognition of Jerusalem as Israel’s capital last December.

As you consider your vote, I encourage you to know the president and the US take this vote personally. The president will be watching this vote carefully and has requested I report back on those who voted against us.

The threats did not work, however, as the UN General Assembly overwhelmingly rejected Washington’s unilateral recognition of the disputed city as Israeli capital.

Russia is ‘never going to be our friend’

When it came to relations with Moscow, the top US diplomat just wasn’t very diplomatic on many occasions, instead choosing to amplify Russophobic rhetoric put forth by Trump’s opposition.

“They are aggressive and they can be difficult to work with in the Council… And they do try to cause some disruption, but we manage them and we continue to remind them what their place is.”

Haley was fully on board with accusations that Moscow meddled in the 2016 US election, calling them aggression on Russia’s part. Election meddling, she said, is Russia’s “weapon of choice and we have to make sure we get in front of it.”

When a country can come interfere in another country’s elections, that is warfare.

The ambassador showed no sign of awareness that her comments about interference sounded ironic and hypocritical when placed next to some others she made – regarding places like Venezuela or Syria.

The US envoy even showed hints of psychic powers, as she tried to downplay Russia’s warnings that Western-backed terrorists were preparing a false flag chemical attack in Syria in order to set up Damascus. Gazing straight into the future, she appeared to point her finger at President Bashar Assad’s government.

If there are chemical weapons that are used, we know exactly who’s going to use them.

In July, the US stunned the international community by withdrawing from the UN Human Rights Council, and the American ambassador had some strong words to back the move.

Judging by how it has fallen short of its promise, the Human Rights Council is the UN’s greatest failure. It has taken the idea of human dignity… and it has reduced it to just another instrument of international politics.

“Its members included some of the worst human rights violators – the dictatorships of Cuba, China and Venezuela all have seats on the Council,” Haley fumed.

When dealing with other states, the US envoy tried her best to uphold an image of an expert on international affairs including on those nation that… well, didn’t even exist.

In a scandalous YouTube recording made by two Russian pranksters, posing as a high-ranked Polish official, Haley was asked to comment on the aspirations of the nation of Binomo in the South China Sea.

We’re aware of that. We’ve been watching that [Binomo situation] very closely. And I think we will continue to watch as we deal with the issues that keep coming up about the South China Sea.

She also said that Russia “absolutely” meddled in the country’s election as well – a truly extraordinary achievement, given that Binomo was entirely made up.