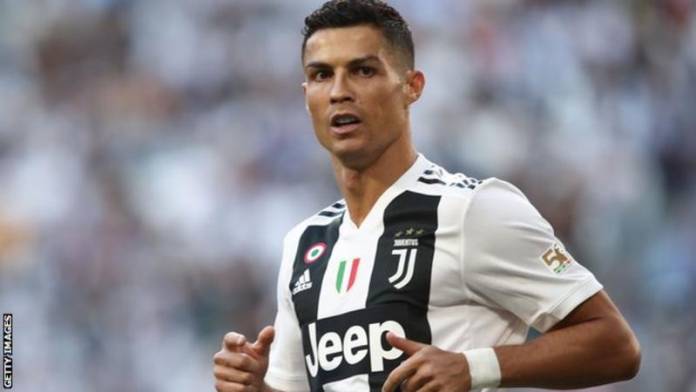 Documents concerning rape allegations made against Cristiano Ronaldo have been “completely fabricated”, according to the player’s lawyer.

Mayorga says she was attacked by the Portuguese footballer in a hotel room in the US city that year.

A statement from Ronaldo’s lawyer Peter Christiansen reiterated the Juventus forward “vehemently denies all accusations in this civil action”.

Ronaldo previously dismissed the claim, first reported in Germany’s Der Spiegel, as “fake news” and his representatives said he would take legal action against the weekly magazine.

Christiansen said a “media outlet irresponsibly” based its reports on “stolen and easily manipulated digital documents” of which “significant parts were altered and/or completely fabricated”.

In 2010, she reportedly reached an out-of-court settlement with Ronaldo involving a $375,000 (£288,000) payment for agreeing never to go public with the allegations.

Christiansen says in a statement his client’s position continues to be that “what happened in 2009 in Las Vegas was completely consensual”.

The lawyer says Ronaldo does not deny that he agreed to enter into an agreement, but “the reasons that led him to do so are at least to be distorted”.

The statement added: “This agreement is by no means a confession of guilt.

“What happened was simply that Cristiano Ronaldo merely followed the advice of his advisors in order to put an end to the outrageous accusations made against him, in order precisely to avoid attempts, such as those we are now witnessing, to destroy a reputation built thanks to hard work, athletic ability and behavioural correction.

“Unfortunately, it is now involved in the type of litigation that is very common in the United States.”

Christiansen added: “Although Cristiano Ronaldo is accustomed to media attention, inherent in the fact that he is a famous person, it is absolutely deplorable that the media continue to propagate and stimulate an intentional defamation campaign based on stolen and easily manipulated digital documents.

“Cristiano Ronaldo has mandated his lawyers in the United States and Europe to deal with all legal aspects and expresses full confidence that the truth will prevail, despite the corruption of counter-information, and in which the laws of Nevada will be enforced and respected.”

He added: “So that there are no doubts: Cristiano Ronaldo vehemently denies all the accusations in this civil action, in consistency with what he has done in the last nine years.

“The documents that allegedly contain statements by Mr Ronaldo and were reproduced in the media are pure inventions.

“By 2015, dozens of entities (including law firms) in different parts of Europe were attacked and their electronic data stolen by a cyber criminal.

“This hacker tried to sell such information, and a media outlet irresponsibly ended up publishing some of the stolen documents, significant parts of which were altered and/or completely fabricated.

“Once again, for the avoidance of doubt, Cristiano Ronaldo’s position has always been, and continues to be, that what happened in 2009 in Las Vegas was completely consensual.”