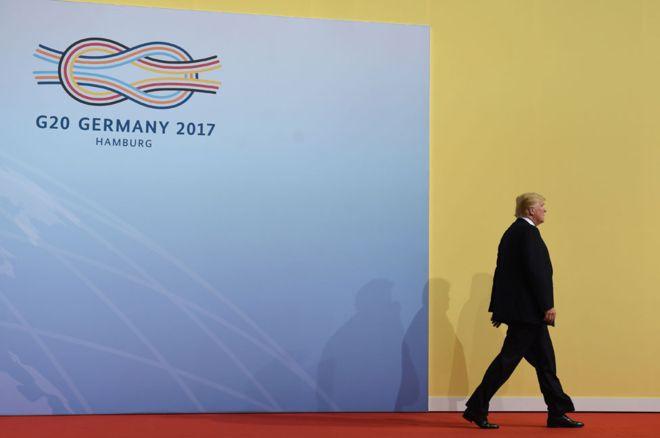 At a moment when America has been focussed myopically on the highest court in the land, the Trump administration stands accused of being a bystander to lawlessness around the world.

The forced disappearance of the Interpol chief, Meng Hongwei, who it turns out is being held by the Chinese authorities.

Mounting evidence underscoring the Kremlin’s involvement in the chemical poisonings in Salisbury.

The seemingly gruesome case of Jamal Khashoggi, the missing journalist who Turkish authorities suspect was killed and dismembered by a Saudi hit squad inside the kingdom’s Istanbul consulate.

All point to a world of disorder: of a slide towards unruliness; of a new era of strongman authoritarianism and a waning of international law.

Traditionally the United States has viewed itself as the upholder of norms, an exemplar of moral leadership, the policeman of global bad behaviour – an idealised notion it has not always lived up to.

But this week has driven home not just how much Donald Trump has been reluctant to perform that role. It also speaks of how his doctrine of patriotism is at risk of being interpreted by other nations as a doctrine of anything goes.

In the red, white and blue of America First do other countries see a green light to act with impunity?

On Wednesday, the president described Jamal Khashoggi’s disappearance as “very serious” and said his administration had raised the case at the “highest levels” with Riyadh.

But the president has stopped short of condemning or criticising the Saudi Arabians, even though the Washington Post reports US intelligence intercepted communications of Saudi officials plotting to capture Khashoggi, one of the newspaper’s columnists and a prominent critic of the Saudi Arabian government.

The Khashoggi disappearance has been absent from Donald Trump’s Twitter feed, his preferred outlet for presidential outrage.

He has not mentioned it at his campaign rallies, another forum where he regular gives vent to his most visceral feelings. Though he smiled on Tuesday night when a rally crowd in Iowa aimed a “Lock Her Up” chant at Senator Diane Feinstein, the ranking Democrat on the Senate Judiciary Committee, he said nothing about the journalist’s disappearance.

Clearly, the White House is keen to avoid a rush to judgment and says it is “demanding” answers from Riyadh. But is Donald Trump’s circumspection merely a cover to avoid reproaching his Saudi allies?

For a president who does not normally hesitate, it could easily be construed as moral foot-dragging and an abdication of traditional American leadership.

Republicans on Capitol Hill have been more damning. Senator Bob Corker, the chairman of the Foreign Relations Committee, said “there will definitely be consequences” if it turns out the Saudis were involved. Lindsey Graham, the president’s golf buddy, said it would be “devastating” to US-Saudi relations. No such public warnings have come from the White House.

President Trump has befriended the Crown Prince, and been staunch in his support of the Saudi leadership.

His first international visit was to Saudi Arabia, where he took part in that that mystical-looking ceremony during which he placed his hands on a glowing orb.

The Trump administration has backed the Saudi-led bombing campaign of Yemen, part of Riyadh’s proxy war with Tehran.

Last November, the president endorsed the royal purge of Saudi princes, businessman and government ministers under the auspices of an anti-corruption drive. He has approved a $1bn (£757m) arms package to the royal kingdom.

On Wednesday, President Trump also reiterated his admiration for the 33-year old crown prince, calling him a “fine man”. He continues to speak of the Crown Prince with almost fatherly pride.

One of the most marked features of President Trump’s foreign policy has been his denigration of close allies and acclamation of leaders who flatter him, whatever their human rights records.

Presently, US Secretary of State Mike Pompeo is organising a second summit with Kim Jong-un. And even though the dictator has been accused among other brutalities of carrying out executions with anti-aircraft guns and of detaining up to 130,000 North Koreans in gulags, the president told a rally in West Virginia last week he “fell in love” with the North Korean at the Singapore summit.

He has commended Rodrigo Dutertes, the president of the Philippines, for an “unbelievable job on the drug problem,” even though the crackdown has led to the killing of 12,000 suspected drug dealers and users, according to Human Rights Watch.

He has given Recep Erdogan of Turkey “very high marks”, despite widespread criticism of the president’s increasingly authoritarian rule. Then there is his well-documented averseness to criticising Vladimir Putin.

The die was arguably cast in the first weeks of the Trump presidency during an interview with the former Fox News host Bill Reilly. “Putin is a killer,” said O’Reilly, when Trump expressed respect for the former KGB spymaster.

As well as suggesting moral parity between the thuggishness of the Kremlin and the actions of successive US administrations, his remarks signalled a temporary end to American exceptionalism, the idea the US should hold other countries to a higher standard and exemplify them itself.

The departure of Nikki Haley is another inflection point. When she steps down as the UN ambassador at the end of the year, the administration will lose its most outspoken defender of international norms.

Haley has been a strident critic of Moscow and Damascus especially. But she, too, has been criticised by human rights groups, for advocating US withdrawal from the UN Human Rights Council and defending Israel’s use of lethal force in Gaza that left 150 demonstrators dead.

Not every international crime has gone unpunished. Twice Donald Trump has authorised limited airstrikes against the Assad regime in retaliation for its use of chemical weapons, enforcing the kind of red lines that Barack Obama paid lip service to but failed to uphold.

Yet President Trump has often been reluctant to take punitive action.

As Bob Woodward’s new book Fear chronicled, the president fumed at aides for pushing him to expel 60 Russian diplomats and suspected spies in retaliation for the Salisbury nerve agent attack. He wanted a more limited response.

In recent weeks, the Trump administration has also been fiercely critical of the International Criminal Court, a body successive administrations have been wary of.

John Bolton warned that if the ICC came after the US or Israel, the Trump administration would ban its judges and prosecutors from entering the United States, sanction their funds and prosecute them in the US criminal system.

Has the US judiciary itself this week taken a hit? Certainly, it was unusual to see Brett Kavanaugh’s swearing-in ceremony at the White House take on the character of a Republican pep rally.

Some of the Supreme Court justices in attendance looked distinctly uncomfortable about the politicisation of the event.

This week, the president spoke of “evil” people, a word in the presidential lexicon deployed by his predecessors against the Soviet empire (Ronald Reagan) and Iraq, Iran and North Korea (George W. Bush).

But he was not talking about the Khashoggi disappearance or international maleficence more broadly, but rather the accusers of his Supreme Court nominee.

These days the US president’s strongest language is directed at political enemies at home.