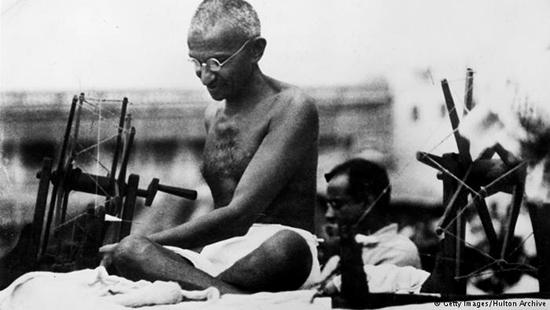 Young activists in Malawi’s business capital Blantyre are outraged by a decision by the Malawian and Indian government to erect a statue of Mahatma Gandhi.

In the heart of one of Malawi’s commercial capital, Blantyre, sits a foundation stone roughly about three meters high. It is expected to hold the statue of the Indian national icon Mahatma Gandhi.

It is a condition from the Indian government through its high commission in the capital Lilongwe that if they are to invest in the construction of an arts conference center in Gandhi’s name. The conference center is pegged at $10 Million (€8.6 million) with plans to be replicated in nine other African Countries.

Mpambira Aubrey Kambewa is one of the three young activists against the erection of the statue. He along with other critics of this decision argues that the statue doesn’t mean anything to Malawians and they will not allow the two governments to put a price on their national dignity, as Kambewa puts it.

“There are several publications by him which have never been retracted in which he says some very racially motivated things against black people,” Kambewa says.

Kambewa and his fellow activists have started a movement dubbed “Gandhi Must fall” earlier this month in which they are collecting signatures both online and on the street. Many Malawians, however, do not even know who Gandhi is and what he is done, according to Kambewa. He says they plan to get as many signatures as they can and camp at the designated spot to ensure that no work takes place.

#GandhiMustFall not only in Malawi

Internationally and especially in India, Mahatma Gandhi is revered for his peaceful fight for Indian independence. As a young man, Gandhi worked as a lawyer in South Africa where he campaigned for the rights of the Indian people there.

In the book, The South African Gandhi: Stretcher-bearer of empire, two South African authors, Ashwin Desai, and Goolam Vahed, examined Gandhi’s life in South Africa. They argued that while he campaigned for the rights of Indians, he was blind to the plight of black Africans and even saw himself above them – an idea that was propagated by the British. Similarly, the prominent Indian writer Arundhati Roy accused Gandhi of upholding the Indian caste system.

In 2015, a man was arrested for vandalizing a statue of Gandhi in Johannesburg with the word #GandhiMustFall. This came at a time when student protests dubbed #RhodesMustFall rocked South Africa over a statue of the former colonial leader of the region, Cecil Rhodes.

In 2016, Ghanaian professors petitioned the University of Ghana and managed to remove a recently launched statue of Gandhi from the campus.

Jimmy Kainja an academic and activist who work’s at Blantyre’s Chancellor College also says it is problematic for government to accept the deal. According to him, many Malawians who have done tremendous work deserve a statue, but not an outsider like Gandhi. “I don’t think as a country, Gandhi has any stake in us – you could extend that to Africa,” says Kainja. “Gandhi may be seen as a hero from a different perspective but not from Africa and the black African perspective.”

Kainja actually says that many young people throughout Africa are starting to question historical events. “Several African governments have faced the pressure from young groups of activists who begin to re-read or understand history from a different perspective,” Kainja explains.

Richard Mathankie, a student of communication and cultural studies at the same University believes that the Malawian government should have taken a stronger stance. “As a country we have the power to say no,” Mathakie says. “If we say yes, it will be like we are just receiving anything without thinking of what will be the negative impact.”

So far, Kambewa and his group have collected over 2,500 signatures more are still pouring in. The target is to hit 10,000.