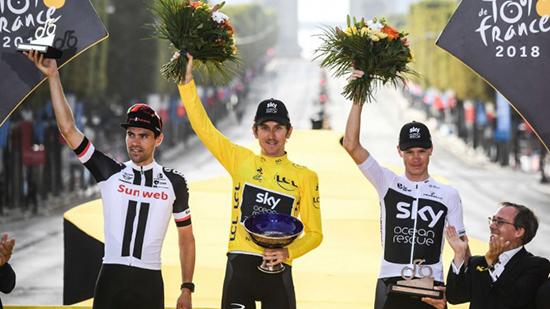 A police investigation has been launched after the Tour de France trophy won by Team Sky’s Geraint Thomas was stolen in Birmingham.

Thomas was awarded the “Coupe Omnisports” after winning Le Tour in July and it was loaned by Team Sky to sponsors and bike manufacturers Pinarello to display at the Cycle Show held at the NEC in Birmingham from 28-30 September.

Also on show were the Vuelta de Espana and Giro d’Italia trophies won by Thomas’s Team Sky team-mate Chris Froome. However, it was only Thomas’s gong that was taken.

The Welsh rider said it was an “incredibly unfortunate” incident and hoped the trophy would be returned. The 32-year-old added: “It goes without saying that the trophy is of pretty limited value to whoever took it, but means a lot to me and to the team.

“Hopefully whoever took it will have the good grace to return it. A trophy is important, but clearly what matters most are the amazing memories from this incredible summer – and no-one can ever take those away.”

In a statement Team Sky confirmed the theft: “Regrettably, during the clear-up operation at the end of the event, Geraint Thomas’s Tour de France trophy was momentarily left unattended and stolen. The matter is obviously now subject to a police investigation. In the meantime, Team Sky are liaising with all relevant parties to agree on the best course of action to resolve the issue.”

Richard Hemington, managing director of Pinarello (UK), said the company were “devastated” about the trophy being stolen. “We accept full responsibility and have personally apologised to Geraint,” he said. “Obviously we all hope that the trophy can be recovered.”

The BBC reports that West Midlands Police believe the trophy was taken sometime between 6.30pm and 7.30pm on 29 September.