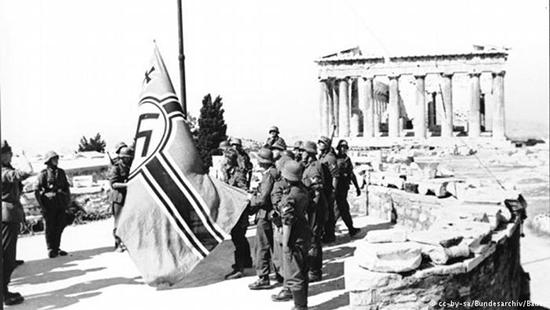 Greece owes Germany billions of euros. Or is it the other way around? More than seven decades after the end of WWII, Athens and Berlin are still at odds over costs incurred during the Nazi occupation of Greece.

German President Frank-Walter Steinmeier travelled to Greece on Wednesday for a state visit, where he is to meet his Greek counterpart Prokopis Pavlopoulos. Talks are set to include topics including the country’s emergence from the debt crisis and ongoing youth unemployment – but an even older topic likely to come up is that of Greece’s demand for German reparations from World War Two.

While Germany has long held the issue as closed, it will be hard to avoid – Steinmeier is to begin his trip with a visit the former concentration camp Haidari, which was operated by the Nazis in an Athens suburb during the Axis occupation of Greece in World War II.

In May 1941, Nazi Germany invaded Greece, and raised the swastika flag on the Acropolis in Athens. The Wehrmacht occupied the country until 1944, with troops marauding and looting towns across the entire peninsula. The economic fallout from the war and the years of occupation have been a matter of controversy ever since.

Greece feels it was at a disadvantage in international reparations negotiations after the end of the war. In 2015, an expert commission tasked by the Greek parliament with determining the extent of that disadvantage determined that losses and damages totaled at least €289 billion (333 billion dollars). Now, its calculations come to €332 billion as well as repayment for a “loan” the Nazis forcibly took from the Bank of Greece.

Forced loans for the occupiers

Damage done during the war, including destruction, looting and murder, is one issue. In accordance with a 1960 agreement, the German government paid 115 million deutschmarks in reparation payments to Greek victims of the Nazi regime. The sum was regarded as covering all demands for individual damages.

But the other issue is a loan Greece was forced to make to Germany. In 1942, Nazi Germany forced the Greek national bank to pay out an interest-free loan to the tune of 476 million Reichsmarks. The Nazis used the money to finance the the “cost of occupation” of Greece as well as military operations. The loan was never repaid. A Greek committee has thus come to the conclusion that Germany still owes Greece about €11 billion ($12.48 billion).

While the German government’s official line has long been to refuse such demands and insist that Greek claims have already been compensated in previous reparation payments, there are high-placed voices in the German government saying otherwise. Accompanying Steinmeier on the state visit is Gregor Gysi, a prominent face of the opposition Left party. “It weighs on me that occupied Greece was obliged by the Nazi regime to give a compulsory loan,” he told the Funke media group. “In my opinion, the Federal Republic of Germany is still liable for this loan. For legal, political, and moral reasons, Germany should pay back the loan and offer negotiations on the interest.”

Peace, but no treaty

The first conference on reparations, in Paris in the fall of 1945, granted Greece a percentage of Germany’s reparation payments for WWII damages. Athens received non-cash benefits worth up to €2 billion.

In the 1953 London Debt Agreement, the Western allies not only postponed settling further demands for reparations until the signing of a peace accord – they also granted Germany a debt reduction.

However, there never was an official peace treaty between Germany and the Allied powers. Instead, the Two Plus Four Agreement on the final settlement with respect to what were then East and West Germany took effect in 1990. The agreement was recognized by Greece and provides for no further reparation payments.

While the issue of reparations has long remained under the surface of international discussion, Greece’s economic crisis has brought the issue back into focus as Athens looks for ways to pay its bills.

In 2010, Athens was forced to ask the EU for help to prevent state bankruptcy. Greece received around €274 billion in loans, of which about €65 billion came from Germany.

Even before he took office in 2015, Greek Prime Minister Alexis Tsipras had pushed for charging the country’s debt against German reparation payments. Some Greek legal experts say that could be a feasible model. Though their main argument is limited to repayment of the forced loan – not reparations as such – most international experts have ruled out the possibility of new payment negotiations more than 70 years after the war ended.