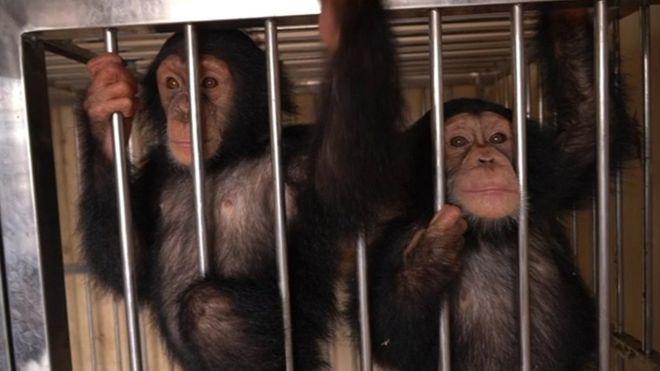 A BBC investigation exposing the scale of chimpanzee trafficking last year has helped police in Nepal uncover a smuggling operation, as Sam Piranty in Kathmandu reports.

Even to a hardened detective the discovery was shocking: two baby chimpanzees, exhausted and hungry, and sucking their thumbs.

The tiny animals had been captured in the wild in Nigeria and then flown thousands of miles to Nepal.

“They were just like small babies,” says the Nepalese police officer in charge, Anupam Rana.

Drugged and hidden inside a packing case, they were victims of a network of wildlife traffickers spanning half a dozen countries.

Although chimps are endangered, the babies are wanted as pets and these two were on the black market for $12,500 each (nearly £9,500).

This is one of many examples of an illegal trade worth billions of dollars every year that is being discussed at a major conference on wildlife trafficking this week in London.

The chimps were rescued in the Nepalese capital, Kathmandu, after officers saw coverage of a BBC News investigation last year that exposed the horrific scale of chimpanzee smuggling.

To seize one youngster in the jungle usually involves poachers killing up to 10 of the adults in its family – they are then sold as bushmeat, while the infant is sold to middlemen.

Our coverage had revealed how dozens of chimps – maybe more – had been illegally exported from West Africa to buyers in the Middle East and Asia.

We also reported that one of the infants had died in Istanbul airport during a long journey from Ivory Coast to Nepal, and this alerted the Nepalese police to a threat they had not previously considered.

An informant at the airport in Kathmandu told detectives from the wildlife unit of Nepal’s Criminal Investigation Bureau about a suspicious crate that had arrived on a Turkish Airlines flight last October.

The police observed the crate being loaded into a van and they followed it from the airport to a property in the city.

When the police moved in, they found that the crate was divided into a series of compartments: the upper level contained birds including types of parrots which can be legally traded with the right paperwork.

But down below, in a compartment that would normally be hidden from view, were the two baby chimpanzees, which should have the highest level of legal protection.

“When you look closely into their eyes, you obviously feel sorry for them,” said Deputy Superintendent Anupam Rana.

“I know they don’t speak but the way they look, you can make out they were very tired… they look very disturbed, so maybe they are seeing all kinds of things on their long journey. They were in a very bad condition.”

Last year we learned of a similar arrangement used by a trafficker in Ivory Coast who had demonstrated in a video how non-endangered animals act as cover to obscure more valuable ones below.

Our investigation last year highlighted how law enforcement officers had often not even realised that chimpanzees were being smuggled under their noses or, if they did, there was no budget to do anything about it.

Our report led to a new dialogue between detectives and wildlife officials from countries in Europe and Africa. And the Nepalese police use it in a training course for undercover wildlife officers. But because the traffickers know they can make phenomenal profits, they are agile and flexible. With every new flight route between Africa and the Middle East or Asia comes new opportunity.

And it’s easy to spot the weak links – poor countries where badly-paid officials might be susceptible to bribes. The London conference will hear that any gains against the traffickers are fragile. This is a constant struggle and the stakes are high: many species including many populations of chimpanzees face extinction in a matter of decades.

The raid in Nepal led the CIB to arrest nine men who are now awaiting trial.

Nepalese police used documentation from the BBC’s investigation to help understand the international nature of the network.

The chimpanzees were sourced by hunters in north-west Nigeria and sold to a Pakistani suspect. In order to pay for them, the police believe the suspect had used a money-changer in Dubai.

They were driven south across Nigeria to Lagos where they boarded a Turkish Airlines flight to Istanbul. After transiting through Turkey’s largest airport, they were flown to Kathmandu where police officers intercepted them.

It’s assumed that the traffickers had bribed their way through airport customs – several customs officials are among the suspects.

If the animals had not been intercepted, it is believed they would have headed to India to be purchased by a private dealer either as pets or to be sold on again.

The head of Nepal’s CIB at the time of the operation, Deputy Inspector General Pushkar Karki, told us how wildlife crime is becoming a big threat in Nepal as smugglers see it as a potential transit route.

“Demand is very high so it’s very lucrative for people, who will smuggle them and when there’s a lot of money there is a lot of temptation for people who do it,” he said.

“As a police officer I see arms, drugs, human trafficking, now wildlife trafficking – that’s where the money is.”

Police confirmed they have arrested hundreds of smugglers in recent years.

Nepal is sandwiched between its two far wealthier and larger neighbours, India and China, and as DIG Karki puts it: “Our neighbours are getting richer and richer, and as you get richer you develop certain tastes.”

Despite their rescue, the chimpanzees find themselves in a diplomatic struggle between Nigeria and Nepal. Under the CITES convention, which seeks to limit the trafficking in endangered animals, countries are supposed to send confiscated animals back to their country of origin.

Nigeria has asked for them to be returned but Nepal sees the chimps as evidence in the upcoming trial of the wildlife smugglers.

Under the convention, chimpanzees can only be exported under a very limited number of exemptions. For example, the animals need to have been bred in captivity (which is not known to happen in West Africa) and exporting and importing organisations have to be registered with CITES and provide genuine documentation.

For now, the chimpanzees – named Chimpu and Champu – are locked away in a small cage in the quarantine section of the national zoo in Kathmandu, along with hundreds of other confiscated animals.

They are seen regularly by a vet and have gained weight despite their ordeal but soon they will outgrow their enclosure, the latest of many painful examples of rare wildlife suffering as a result of a cruel trade.