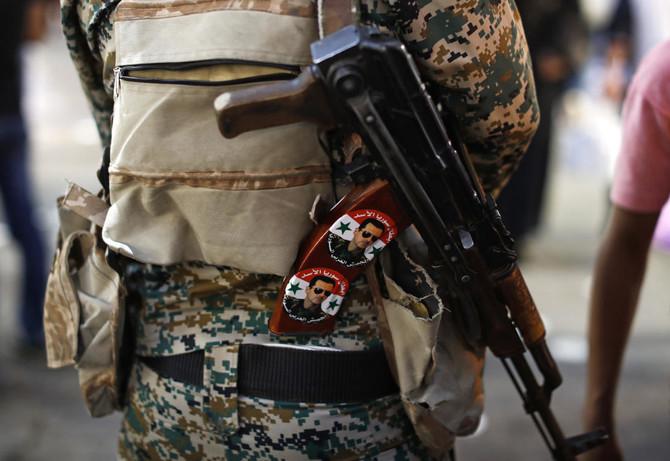 MOSCOW: More than 1,000 militants have left a demilitarized zone in Syria’s rebel-held region of Idlib, Russian Foreign Ministry spokeswoman Maria Zakharova told reporters on Wednesday.
Russia and Turkey agreed to enforce a new demilitarised zone in Idlib from which “radical” rebels were required to withdraw by Oct. 15.

The demilitarized zone ringing the Idlib region is the result of a deal reached last month between rebel backer Turkey and government ally Russia to stave off a regime assault on Syria’s last major rebel stronghold.
The accord called for a complete withdrawal of all heavy weapons from the planned buffer by Wednesday, and rebels and jihadists appeared to have met that deadline.
“The pullout of heavy weapons from the de-militarized zone was completed on October 10,” the Turkish defence ministry said.
Rami Abdel Rahman, who heads the Syrian Observatory for Human Rights, said no heavy weapons were visible in the buffer already from Tuesday.
He was unable to confirm any pullout from a part of the planned zone that falls inside Latakia province but said any such weaponry was not out in the open.
“They could have been moved to trenches or secret locations,” he said.
The Turkey-backed National Liberation Front (NLF) rebel alliance said it had pulled out all heavy arms by Monday, and the Observatory said jihadists quietly followed suit.
Despite the relatively speedy implementation of the accord’s first deadline, observers say a thornier task lies ahead.
Under the deal, the zone must be free by October 15 of all jihadists, including those of Hayat Tahrir al-Sham (HTS), the region’s dominant force led by former Al-Qaeda fighters.
With five days to go, HTS and other jihadist fighters remained inside the planned buffer area and showed no sign of leaving.
HTS, which controls more than two-thirds of the planned zone, has not officially responded to the Turkey-Russia deal.
Haid Haid, an associate fellow at the Chatham House think-tank, said HTS had made the “pragmatic” move of pulling out its heavy weapons.
“Of course implementing the heavy weapons point is easier,” he said. “The harder point is withdrawing forces from the area.”
Syrian Foreign Minister Walid Muallem had expressed confidence in Turkey’s ability to fulfil its side of the deal “because of its knowledge of factions” on the ground.
HTS, jihadists from the Turkestan Islamic Party (TIP) and current Al-Qaeda outfit Hurras al-Deen control more than two-thirds of the planned buffer zone.
Many of HTS’s fighters have battled for years in Syria under various groups and are keen to keep their influence in the war-ravaged country’s largest remaining rebel bastion.
“HTS is playing the long game in Idlib,” said Nicholas Heras of the Center for a New American Security.
“It is making the assessment that Turkey will allow it to continue to operate in northwest Syria, so long as HTS keeps a low profile,” he added.
“As long as HTS stays on Turkey’s good side, it has a golden opportunity to set permanent roots in Idlib,” Heras said.
In recent weeks, Turkey has dispatched convoys of troops to monitoring posts in the region and its soldiers are expected to patrol any future buffer zone.
Forces loyal to President Bashar Al-Assad have retaken large parts of Syria from opposition fighters and jihadists since Russia intervened in September 2015.
After a series of victories near Damascus and in the south of the country earlier this year, a similar Moscow-backed assault had been expected against Idlib before the Russia-Turkey deal was announced.
Despite progress in implementing the accord, Assad insisted on Sunday it was a “temporary measure” and that Idlib would eventually return to state control.
Heras said Damascus and Moscow could use the grace period to focus on reconstructing Syria’s war-ravaged infrastructure.
“The Russians want to freeze the war in western Syria and get on with the business of rebuilding Assad’s zone of control,” he said.
“Assad might want to reconquer Idlib, but for now he does not have a better option than this deal,” he said.
The Syrian war has killed more than 360,000 people since it erupted in 2011 with the brutal repression of anti-government protests.

Meanwhile, the UN on Wednesday urged warring parties in Syria to allow basic health service deliveries to tens of thousands of increasingly desperate Syrians trapped in the desert near the Jordanian border.
The global body’s fund for children, UNICEF, said two babies without access to hospitals had died in the past 48 hours near the Rukban border crossing.
“Once again, UNICEF appeals to all parties to the conflict in Syria and those who have influence over them, to allow and facilitate access to basic services including health for children and families,” said the agency’s Middle East and North Africa director, Geert Cappelaere.
“This is the very minimum for human dignity.”