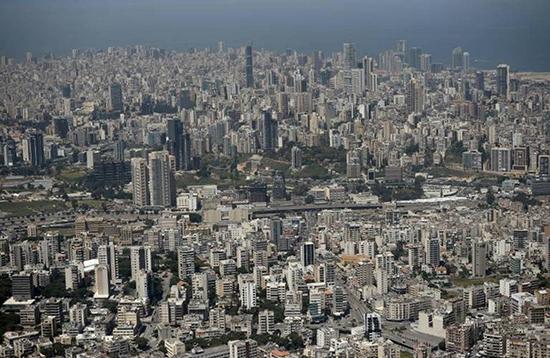 The unplanned urban sprawl has led to the underdevelopment of efficient infrastructure systems.

BEIRUT: Cities all over the world have been growing in size and in number as more than half of the world’s population is living in cities today. Studies have shown that this global trend is not the same in different parts of the world, as for instance, urbanization rates are higher in Asia and in Africa in comparison to Europe. The situation has triggered the development of new urban studies and innovative urban planning approaches and theories in order to investigate the notion of urbanization.

Where does Lebanon stand in this global trend?

Since the 1990s, Lebanon has been experiencing high levels of urbanizations. Studies done by Statista show that urbanization in the country has been following an increasing pattern over the years, reaching 88 percent of Lebanon’s population lived in cities by 2017. The country is undergoing what can be called a rapid phase of urban transformation. Unfortunately, this transformation is chaotic and unplanned leading to urban sprawl and to the lack of development of an adequate physical infrastructure system.

The causes of urbanization can be summarized in two major points which are, first, the increase in population and, second, the migration of people and their settlements in urban areas. On one hand, Lebanon’s population has increased in the past years due to natural causes (the increase of birth rates and the decrease of mortality rates) and due to the inflow of more than two million refugees. On the other hand, the country suffered extensive displacement of people during and after the Civil War, which was followed by unprecedented and unplanned urban growth.

The centralization of services and the lack of an appropriate transportation system connecting the various parts of the country has led people to settle at the proximity of urban centers searching for better conditions of life, which gave birth to urban agglomerations.

Urbanization could have positive implications as it leads to the concentration of both human and economic resources in one place which incites innovation and business development. It increases socio-cultural diversity and gives access to better social, educational and health services, as well as various cultural activities.

Additionally, the concentration of residents in the same area increases the cost efficiency of various infrastructure projects, such as the supply of basic facilities like electricity and fresh water. However, when unplanned, urbanization could have adverse effects manifested in urban sprawls and negative social, economic and environmental impacts.

Unfortunately, this is the case in Lebanon.

More on the negative side, the concentration of people in one area leads to unrestrained increases in real estate prices paralleled with the development of urban slums. As a case in point, rents in Beirut are at least four times higher than the minimum wage, which makes them unaffordable to the vast majority and increases the demand on housings in peripheral areas of the city.

This increase in demand has led to the fast and uncontrolled development of construction projects in “virgin” areas and to high real estate prices outside the city too. The situation also led to urban slums offering poor living conditions, with restricted access to sanitation and basic services.

This pressure caused by extreme urbanization has increased social inequalities and the resulting upsurge in social problems.

Moreover, urbanization poses risks on the environment, as it affects the availability of green spaces and increases the pressure on natural resources. For example, many areas in Lebanon, namely Mansourieh, Zouk Mikael, Jiyeh, Antelias and Hazmieh have lost their green spaces and are now conquered by residential and commercial developments.

The unplanned urban sprawl has led to the underdevelopment of efficient infrastructure systems. These manifestations are symptoms of institutional deficiencies, which is noticeable in the area of planning and regulation. The lack of coastal, regional or national land-use plans, poorly defined national planning authorities along with extreme urbanization have led to the deterioration of the environment, as well as various economic and social problems manifested in our daily lives.

Urbanization is a global phenomenon; however, it requires an attention on a local national level. To address the problem, master plans should be set and existing building regulations should be revisited and reconsidered. The decentralization of services should be considered to reduce the pressure on urban agglomerations, and to allow for an equitable and sustainable development across the country.

A well-designed transportation system should also be developed to reduce the high levels of urbanization and to allow for services’ accessibility to people from different parts of the country. Not only that, but further researches and studies are also required on this topic at a national level to address solutions to reduce the pressure on urban centers and to bring back life to abandoned and forgotten rural areas.

Reem Khamis graduated from the Lebanese American University with a bachelor of Architecture and accomplished her masters in Environmental and Energy Management at the University of Twente in the Netherlands. Her thesis was an emphasis on urban resilience and climate change adaptation in megacities using a comparative approach of Cairo, London and New York. Khamis is currently undergoing her Ph.D. studies in Environmental and Energy Solutions at the University of Pau and Pays de L’Adour in France.