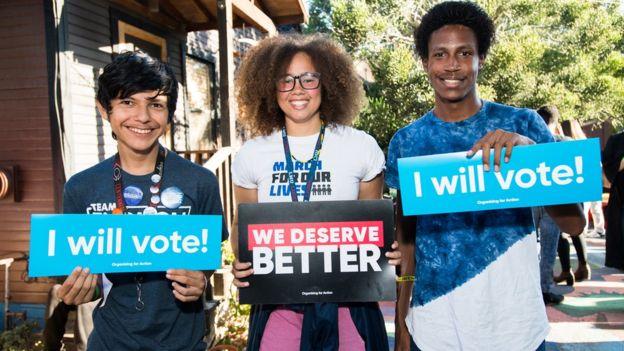 This election has been billed as one in which young people form a powerful voting bloc, propelled by the momentum generated by school shootings earlier in the year, and mobilised by celebrities like Taylor Swift and Rihanna. But will they turn up on the day?

Young turnout in mid-term elections in the US is historically low but some signs, including participation in recent primaries and voter registration, suggest that numbers may be higher this year.

At the same time, however, other data indicate that very little may change.

Recent special and primary elections had higher turnout than previous years fuelled, in part, by greater participation of young voters, says Dr Michael McDonald, an associate professor of Political Science at the University of Florida.

He runs the United States Elections Project, which has election data from as far back as 1787.

Early signs suggest that this could happen again next month.

“You do expect young voters to be more engaged in this election than in recent [ones],” according to Dr McDonald.

Health care, immigration and the economy are some of the most important issues for them, according to surveys, and they tend to engage more with candidates addressing those subjects.

Despite all of the above, don’t forget that young turnout in mid-term elections is historically low, hovering around 20%. They are also the age group most likely to not vote.

There have been some initiatives to change that. Apart from calls from politicians and celebrities (more on that later), more than 100 companies – including Walmart, the country’s largest employer – have joined the campaign Time to Vote.

The goal is to boost participation among their employees, many of them young voters – a different Pew survey suggested that conflicting work or school schedule was a reason for a third of those interviewed to miss voting.

Lyft and Uber, for example, are offering discount or even free rides for some voters.

“The issues have to matter to the voters in order for them to be engaged and young people, because they haven’t been exposed to politics for as long, don’t have strong attachments or aren’t following politics as close as older people.”

And deeply partisan. And polarised. All of this could either encourage young people to vote or contribute to keep them away from the process.

A poll by MTV/AP-Norc in July with people aged 15-34 suggested that:

That pessimism, however, can actually boost participation, says Dr McDonald.

“Anger is a very potent emotion that can motivate people to participate in elections. Negativity doesn’t necessarily have a negative impact. It can turn some people off… but it energises [many].”

In 2013, Steven Olikara founded the non-partisan group Millennial Action Project to encourage bipartisan dialogue among young legislators. He said one of their top priorities is to take the “legislative process into the digital age,” where much of the debate happens, and “making government more transparent.”

Writing at the website Salon, he adds: “Beyond writing legislation, young elected officials are chipping away at political dysfunction by engaging in constructive, civil discourse.”

The movement for gun control created by the survivors of February’s high-school shooting in Parkland, Florida, raised hopes of more political youth engagement.

There are mixed conclusions on that. Based on information available from 46 states, Target Smart, a Democratic political analytics firm, said there was an increase of 2.16% in registrations of 18-29 year olds nationwide following the shooting that left 17 students and workers dead.

Some states with critical elections had significant increases, like Pennsylvania (10 point rise), Arizona (7.6) and Florida (7.9).

“The spike in voter registration activity comes on the heels of the grassroots movement to address gun violence issues,” they said.

But a Washington Post analysis of data tracked by Aristotle Inc found almost no change in registration numbers on that age group. Even in Florida.

Or is there one?

First, there was Taylor Swift.

Citing events in “the past two years”, the singer endorsed two Democrats in her home state, Tennessee, to her 112 million followers on Instagram last weekend. The post itself was liked by more than 1.6 million people.

Vote.org’s Kamari Guthrie was quoted by Buzzfeed News as saying the site had seen a “registrations spike” in the state and also a bump in registration nationwide following the singer’s post in the popular photo-sharing platform.

The singer’s announcement came ahead of a registration deadline in Tennessee and other states, when numbers usually go up, so it is difficult to say with certainty that the Swift effect is behind the rise.

Ms Guthrie, however, told the New York Times she had “never seen a 24- or 36- or 48-hour period like this” since Vote.org was created, in 2016. And many of those who registered were young people, she said.

The impact of famous people backing political candidates or causes is debated.

Some experts say there is no concrete evidence that celebrities’ endorsements or positions have a significant impact on voters.

In any case, Rihanna, Kanye West and others have also made their political feelings publicly known.