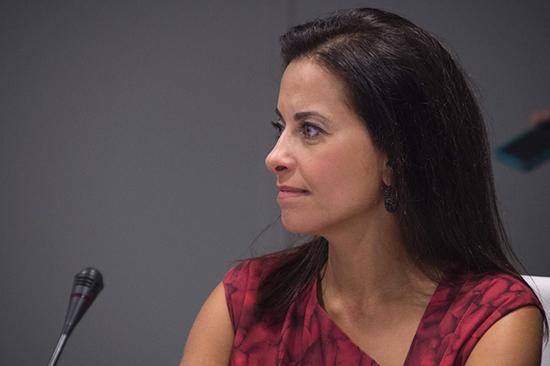 After Nikki Haley’s surprise resignation as President Donald Trump’s ambassador to the United Nations, tongues are wagging about who will replace her. One name keeps on coming up: Dina Powell.

Powell, 45, was Trump’s deputy national security adviser with a focus on Middle East policy until January 2018, when she left Washington, D.C., to return to New York. She is highly regarded for her political and diplomatic skills.

Powell was born Dina Habib, in Cairo. Her family immigrated to Dallas when she was just 4 years old, according to a 2005 profile of her in the Los Angeles Times.

Powell enrolled in a liberal arts program at the University of Texas at Austin, its alumni magazine, The Alcalde, noted in a 2007 article. To pay for her education, she worked for two Republican state senators.

Upon graduation, in 1995, Powell went to Washington, D.C., to intern for Senator Kay Bailey Hutchison before joining the staff of House Majority Leader Dick Amery.

After the 2000 election put George W. Bush in the White House, she was called to work on the transition team, rising up to assistant to the president for presidential personnel at just 29 years old. This made Powell the youngest ever person in that role, The Alcalde reported.

Her language skills—she is fluent in Arabic—led Powell to the State Department, where she worked under Secretary of State Condoleezza Rice.

According to The Washington Post, Powell focused on creating public-private partnerships in the Middle East to rebuild and renew areas destroyed by war.

She left the State Department in 2007 to join the investment banking giant Goldman Sachs as a managing director. She later became a partner, working for the firm’s charitable foundation and earning an annual compensation package of $2 million, The New York Times reported.

“I’m really sorry to lose her. She is fantastic,” Rice told the Post at the time. “She had so many ideas. There are people who have ideas but can’t execute them. She really executed them.”

She was part of the planning team for President Trump’s trips to Israel and Saudi Arabia, where she is said to have clashed with former White House chief strategist Steve Bannon.

After leaving the White House, Powell returned to Goldman Sachs, where she works on the bank’s management committee and “is responsible for helping to build and enhance the firm’s relationships with sovereign clients around the world,” according to her staff bio.

Now it appears she may be headed back to the White House—Trump said he is considering Powell for the U.N. ambassador role, Reuters reported.