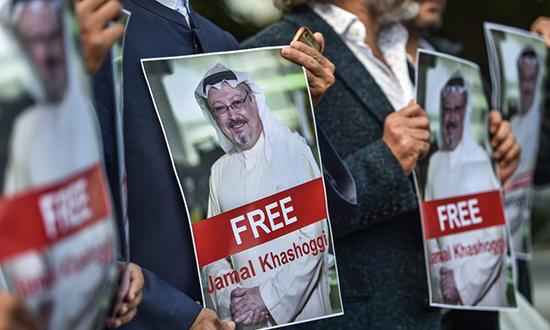 The Saudi journalist disappeared after entering the Saudi consulate in Istanbul, days after telling the BBC he feared returning to the kingdom.

Saudi journalist Jamal Khashoggi never wanted to be referred to as an opponent of the Saudi government. He was a writer who wanted a space to express himself freely, a former Riyadh insider with a lot to say from his self-imposed exile, and a vocal critic of the Saudi Crown Prince Mohammed bin Salman.

The 59-year-old journalist disappeared last Tuesday in Istanbul, after he was last seen entering the Saudi Arabian consulate. Turkish authorities have leaked their assessment that Khashoggi was murdered on the premises. The Saudis have denied involvement in the disappearance and insisted Khashoggi left the consulate. A Turkish investigation is ongoing.

Saudi activists in exile say the disappearance fits a pattern of repression by the regime. Khashoggi, however, may be the most high profile and risky target yet.

Jamal Khashoggi, 59, was born in the Saudi city of Medina, home to one of the holiest sites in Islam. Like many Saudis who went abroad for their higher education, Khashoggi chose the United States, earning his diploma from Indiana State University in 1983.

He then plunged into the world of journalism, covering the Soviet invasion of Afghanistan and the resistance of the mujahideen. He interviewed fellow Saudi Osama bin Laden multiple times, tracking his trajectory from Afghanistan to Sudan.

He was appointed editor of Saudi Arabia’s Al Watan newspaper in 2003 but was fired after just two months for publishing stories critical of the Saudi clerical establishment, according to a BBC profile.

In a 2011 interview with Der Spiegel during the heady days of the Arab uprisings, Khashoggi said he had long shared bin Laden’s view that there were “only two ways to liberate the Arab world of its corrupt regimes: by infiltrating the political system through its institutions, or by violently overthrowing the depraved ruling cliques.”

“Democracy ‘was not an option at the time,’” he told the German news weekly.

But his views evolved, and popular movements from Bahrain to Syria would cement his support for democracy.

“The absolute monarchy is obsolete,” Khashoggi told Der Spiegel in that interview. “Democracy is the only solution.” The interviewer noted in her article that “others in Saudi Arabia would be interrogated and locked up for such words.”

She was, of course, referring to Khashoggi’s stature as a palace insider and onetime advisor to the royals.

During that 2011 interview, he spoke from Kingdom Tower, where he was working with the Saudi maverick billionaire Prince Al-Waleed bin Talal to start a new Arab satellite station that would be modeled after the daring Al-Jazeera. After its 2015 launch, the station lasted less than 24 hours before being ordered off the air.

‘What we are becoming’

The rise of Mohammed bin Salman and the sidelining of the old guard signaled the beginning of a tightening space for political discourse in Saudi Arabia. The new heir to the throne, who jumped to the head of the line of succession in June 2017, was intent on cementing his grip on power. In the months to come he rounded up clerics first, then hundreds of princes and business tycoons, including the maverick Al-Waleed, shaking them down and setting the tone for absolute rule.

Women’s rights activists did not escape the crackdown, and a group of prominent trailblazers were thrown in jail just one month before the ban on women’s driving was lifted.

Khashoggi saw the writing on the wall and left the kingdom for exile in the United States.

One year ago, Khashoggi began penning a column in the Washington Post, a platform that allowed him to express his critical views of the crown prince’s policies, from the war in Yemen to the abduction of the Lebanese premier, to the jailing of women’s rights activists.

He even went so far as to accuse Mohammed bin Salman of peddling a revisionist history of Saudi Arabia’s past.

He knew that his writings put him in danger.

In an interview with the BBC just three days before his disappearance, he said he was living between Istanbul, the home of his Turkish-Omani fiancee, and Washington, DC. Asked if he returned to the kingdom on occasion to test the waters, he admitted that he could not see himself going back to Saudi Arabia anytime soon.

“I hear of an arrest of a friend who did nothing that’s worth to be arrested. It made me feel I shouldn’t go. I’m talking. That friend who was arrested wasn’t even talking. Maybe he was talking critically over something at a dinner party.

“That’s what we are becoming in Saudi Arabia. We’re not used to that,” he said.