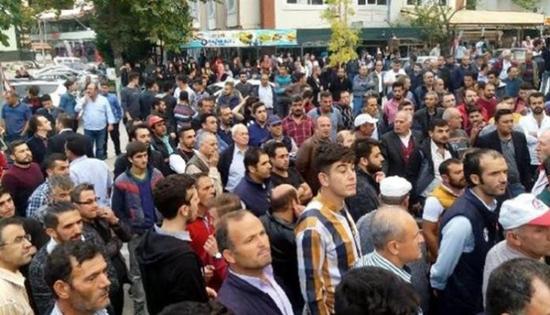 A total of 927 Syrians have been forced to move from the Kale district of Denizli province in western Turkey to the Denizli city center due to public outrage over a child abuse scandal in which several Syrians were allegedly involved, Turkish media reports said on Thursday.

A 14-year-old girl was reportedly sexually abused by 10 men in Kale. Seven of the alleged perpetrators, one Turk and six Syrians, have been arrested while the remaining three are at large, according to a statement from the Denizli Chief Public Prosecutor’s Office on Thursday.

On Wednesday night angry residents of Kale gathered in front of the Kale District Governor’s Office in protest of the incident, and some members of the crowd attempted to attack two Syrians who were just passing by. Police rescued the Syrians from the angry crowd and took them out of the area in an armored police vehicle.

Kale District Governor Murat Güneş and Kale Mayor Mehmet Salih Sağınç asked the crowd to remain calm, while Güneş said all the Syrians, who numbered 927, in the district have been moved out.

It was announced from the municipal loudspeakers that all the Syrians have been removed from Kale.

The Kale Chief Public Prosecutor’s Office imposed a broadcasting ban on the incidents in the district.

Turkey, which is already struggling with socioeconomic strains and political tensions, is overwhelmed by the issue of integrating 3.7 million Syrians who have taken refuge in the country due to a civil war in Syria ongoing since 2011. There are frequent tensions between Turks and Syrians.