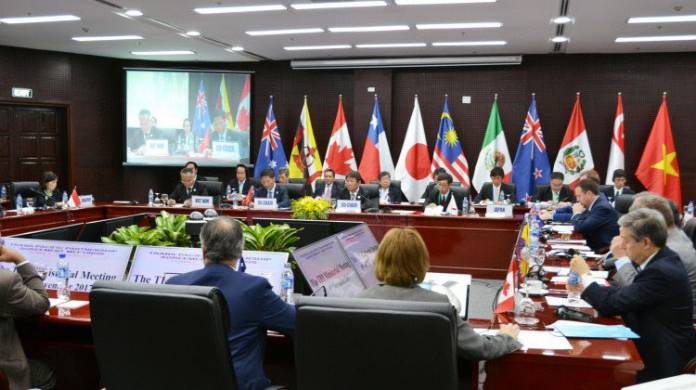 Officials are exploring the possibility of China becoming a member of the CPTPP, source close to the government says

Beijing is looking into joining a trans-Pacific trade deal that it was previously shut out of by the US amid mounting pressure from the trade war, according to a source close to the Chinese government.

China could hedge against US President Donald Trump’s protectionist “America first” strategy and boost its role in free trade by joining the 11-nation Comprehensive and Progressive Agreement for Trans-Pacific Partnership (CPTPP), observers said.

So far China has not publicly expressed any interest in joining the pact and it did not apply for membership of the previous TPP deal – which Trump has pulled the US out of – calling it too complex.

But attitudes towards the CPTPP have been quietly shifting in Beijing, with Chinese officials over the past few months exploring the possibility of, and seeking advice on, joining the deal, according to the source, speaking on condition of anonymity.

Observers said joining the wide-ranging agreement between 11 nations – including Japan, Vietnam, Malaysia, Canada, Mexico and Australia – would allow Beijing to expand its trade links and unlock growth potential at a time when China risks being economically isolated by the US.

In a move that could unsettle policymakers in Beijing, a new trilateral trade agreement reached last week between the US, Canada and Mexico, subject to ratification, has a clause that gives Washington a near-veto over any attempt by Canada or Mexico to reach a free-trade deal with a “non-market economy”, which observers say targets China.

“The biggest worry is the possible new alliance between the US and its allies forming new trade barriers to exclude China from market access,” said Wang Huiyao, director of the Centre for China and Globalisation, a think tank in Beijing.

He said joining the CPTPP could send “a strong message” to the world about China’s progress on opening up and reform.

“Joining the CPTPP could become a tool to hedge against the US and help China establish a new trade circle in addition to the ‘Belt and Road Initiative’ and Shanghai Cooperation Organisation,” Wang said. “We can’t just stay away from the other [trade] circles.”

China viewed the original TPP with suspicion when it was first drafted in 2015. At that time, the US under the administration of Barack Obama was spearheading efforts to finalise the deal, which was seen as an attempt to reduce signatories’ dependence on Chinese trade and bring them closer to the United States.

Beijing expressed dismay at being excluded from the pact, which had stronger environmental and labour standards than the CPTPP, saying all trade deals should be transparent and inclusive.

But the agreement was left in limbo after Trump pulled the US out of the deal, calling it a “potential disaster”. Japan has since taken the lead in saving the agreement, which, despite some watering down of key provisions, is still believed to be a “gold standard” multilateral trade agreement that covers labour, intellectual property protection and the environment, and cuts more tariffs on goods.

Japan and the remaining 10 countries finalised a revised version of the pact in March and renamed it the CPTPP.

Talk of Beijing joining the trade deal comes as China and Japan have been seeking to mend fences, with Japanese Prime Minister Shinzo Abe due to visit Beijing this month. Economic cooperation is believed to be high on his agenda, though it is unclear whether Abe plans to raise the idea of China joining the CPTPP when he meets Chinese President Xi Jinping.

Abe has invited Britain to join the agreement, and countries like Thailand, South Korea and the Philippines have also expressed interest. Trump said in April that the US would reconsider the deal if it were “substantially better”.

“They might, of course; they have demonstrated their interests [in the TPP-11],” Pinera said when asked if he had spoken with the Chinese side about the joining.

China is currently in talks for free-trade agreements with 27 countries. It is also involved in multilateral trade negotiations such as a China-Japan-South Korea deal and the Regional Comprehensive Economic Partnership (RCEP) between 16 nations that is expected to be signed before the end of this year.

Tu Xinquan, a professor at the University of International Business and Economics in Beijing, said joining the CPTPP on top of that deal could be a smart move, and the sooner it happened the better.

“The CPTPP is stronger on free trade, and [joining] could expand China’s allies and show the outside world that it is serious about speeding up reform and opening up – and that could also boost other countries’ confidence in China,” Tu said.

He added that without Washington involved in the deal, Beijing could be in a better position to negotiate the terms, including on investment and intellectual property protection.

But Chen Long, an economist with Gavekal Dragonomics, said it would not be easy for China to join the CPTPP.

“The possibility of formal talks on China’s accession is still unclear given the US influence on the CPTPP members,” Chen said. “China may face tough negotiations over aligning its industrial and intellectual property policies with the agreement.”

So far, Mexico, Japan and Singapore have already ratified the CPTPP, and Vietnamese Prime Minister Nguyen Xuan Phuc said last week that he expected his country to do so in November. The CPTPP would come into effect after six members have ratified the deal.