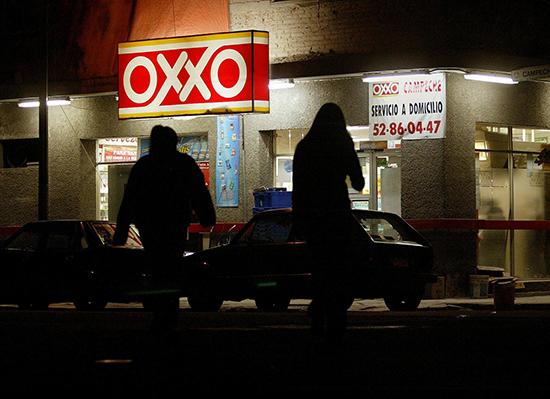 MEXICO CITY (Reuters) – Stroll the aisles of any Oxxo in Mexico and you will find the staples of convenience store sustenance: beer, cigarettes, enough candy to keep dentists at full employment.

Look closer and you will see this old-school chain is a linchpin of the country’s e-commerce. The retailer, with more than 17,000 locations throughout Mexico, has cracked two of the biggest barriers to online shopping in the developing world: payments and pickup.

Shoppers lacking bank accounts – more than 60 percent of Mexico’s population – can plunk down cash at their local Oxxo to make purchases from more than a thousand online merchants. Those who live in dangerous or remote areas where home delivery is complicated can then head back to Oxxo to retrieve their merchandise.

The pick-up program, offered with Amazon.com Inc, operates in nearly 3,000 Oxxo locations, with plans to expand. Oxxo is in talks with other merchants to handle their packages too, said Asensio Carrion, Oxxo’s director of financial and electronic services.

Oxxo takes a cut from both merchants and consumers on most transactions. It’s not rocket science. But analysts say Oxxo has seized on a lucrative opportunity to cement itself into the e-commerce supply chain in places where online shopping is not the seamless affair it is in wealthy countries.

That makes it one of the few companies in the world with the leverage to go toe-to-toe with Jeff Bezos, Amazon’s billionaire founder. At a time when many brick-and-mortar retailers view e-commerce as a threat, Oxxo has found a sweet spot.

“Mexico runs on cash. This is the huge advantage of a company like Oxxo,” said Enrique Culebro, head of Mexico’s internet association.

That is good news for parent company Fomento Economico Mexicano, known as Femsa. Oxxo generates about 35 percent of Femsa’s revenue and is the “driver of the company,” said Jose Cebeira, an analyst at Mexico City brokerage Actinver. Femsa shares are up about 50 percent since the end of 2014.

Not content with remaining a middleman, Oxxo is working on e-commerce efforts of its own. The company will test a home-delivery app next year, and is considering an e-wallet that would allow shoppers to store balances for online purchases, Carrion said.

But Oxxo must ensure that its e-commerce experiments do not clog registers and undermine its core business of selling Cokes and smokes, says Mexico fintech consultant Gabriela Zapata.

“For the person behind you who just wants a quick pack of cigarettes, waiting four minutes is not ideal,” she said.

The small, irregular floorplans of Oxxo stores have already posed challenges for Amazon’s package program, which is limited to small items worth up to 1,500 pesos ($79). A clerk at an Oxxo in Mexico City said her store only accepts goods she can tuck under the register to avoid attracting thieves.

And competition is mounting: Amazon in August began selling non-perishable food and beverages in Mexico.

BANKING ON THE UNBANKED

With around 125 million people and Latin America’s second-largest economy, Mexico is a magnet for online merchants. But to reach millions of Mexicans without bank accounts, they have been forced to get creative.

Oxxo began addressing this challenge in 2012 after Mexican regulators allowed retailers to perform certain banking operations. The chain became a place where customers could pay household bills in cash. In 2013 it rolled out Saldazo, a debit card whose name loosely translates to “big payment.” More than 10 million cards are now in circulation.

Next up was online shopping. “We’re good at cash in and cash out,” Carrion said. “But we saw e-commerce growing very fast, and we saw that we could participate in other parts of the value chain.”

In 2016, Femsa invested in digital payments startup Conekta and partnered with the firm last year to launch Oxxo Pay, which gives online merchants real-time confirmation when customers pay in cash.

“We are the bridge between the unbanked and companies that want to get payments from the unbanked,” Conekta co-founder Hector Cardenas said.

The company is in talks with Amazon to bring the company onto the Oxxo Pay platform, he added.

The convenience chain is also fine-tuning its operations to ensure the new transactions do not bog down basic shopping. Carrion said Oxxo is exploring cash registers dedicated to services.

Companies that work with Oxxo say it knows the value of its scale and brand – and its terms are not cheap.

Merchants on Oxxo Pay, for example, are charged a 3.5 percent commission per transaction. Consumers hand over 10 pesos.

Oxxo’s business model has tested its relationship with Amazon. The companies clashed over whether Oxxo could charge fees to Amazon customers for pickups and deposits to Amazon Cash, which lets customers store a balance in an Amazon account, according to a person familiar with the matter.

Amazon launched its pickups without customer fees. But negotiations for Oxxo to handle Amazon Cash are shaping up differently, Carrion said. If the partnership goes through, he said Oxxo will collect a fee from users.

“We collaborate with every business partner in order to ensure projects that will bring benefits for our customers, without dictating any terms unilaterally,” Femsa said in a statement.

Meanwhile, some startups complain Oxxo takes too big a slice of their business.

“Something has got to give,” said Federico Antoni, managing partner of ALLVP, a Mexico City-based venture capital firm. “The rent that Oxxo is charging in these industries is not sustainable.”

But many Mexicans do not mind handing over a few extra pesos for convenience.

Brandon Arellano, a 21-year-old marketing worker who lives in the capital, recently tried buying some video games online. When the merchant declined his debit card, he grabbed some cash and headed to the corner store to complete the transaction.