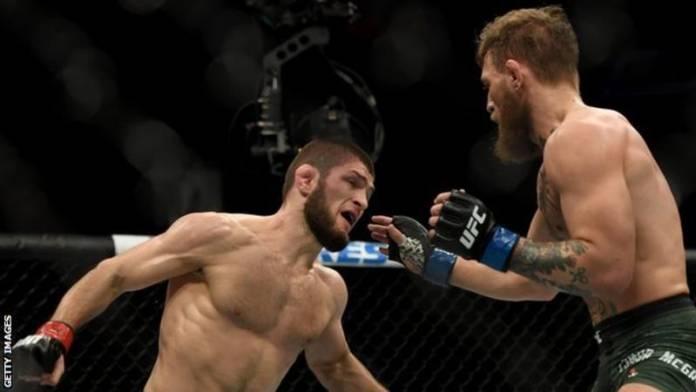 UFC fighter Khabib Nurmagomedov has threatened to quit the sport should they fire a team-mate for his role in scenes that marred the end of the Russian’s win over Conor McGregor.

Nurmagomedov leapt from the octagon to challenge a member of McGregor’s entourage after beating the Irishman to retain his world lightweight title.

McGregor fought with his rival’s camp as brawls broke out around the venue.

Fighter Zubaira Tukhugov was one of those alleged to have hit McGregor.

His forthcoming fight against Artem Lobov at the end of October has since been cancelled.

Nurmagomedov believes his compatriot is being penalised for his role in events at the T-Mobile Arena in Las Vegas on Sunday, adding he would stand up to any further sanctions.

“Decide to fire him, you should know that you’ll lose me too,” he wrote in an Instagram post.

He added: “Why do you have to punish my team, when both teams fought?”

Tukhugov is alleged to have jumped into the cage following Nurmagomedov’s win and punched McGregor in the back of the head.

Nurmagomedov, 30, said: “We never give up on our brothers in Russia and I will go to the end for my brother.

“If you still decide to fire him, don’t forget to send me my broken contract, otherwise I’ll break it myself.

“Don’t forget that it was Conor who had hit my another brother first, just check the video,” he added.

The scenes at the weekend were the culmination of a long-running row between Nurmagomedov and McGregor.

In April, McGregor travelled from Dublin to Brooklyn to confront Nurmagomedov and his team, after footage emerged of them surrounding and intimidating the Irishman’s team-mate Lobov in a hotel.

McGregor attacked a bus with Nurmagomedov and several of his team-mates on – he was subsequently arrested and found guilty of disorderly conduct for his actions and sentenced to community service.

The Nevada State Athletic Commission, which sanctioned last weekend’s bout, has withheld Nurmagomedov’s fight purse while it investigates the matter.

UFC boss Dana White has said he expects the Russian to receive a suspension – though stressed he should keep his belt.