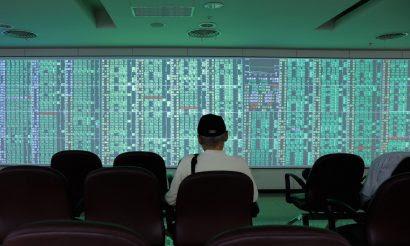 What followed next was a sea of red ink, or green in China and Taiwan, across US, European and Asian markets.

In the Greater China region, the Shanghai composite tumbled to its lowest level in four years, shedding 5.2% to close at 2,583.46. Tech-heavy Shenzhen suffered an even worse fate, plunging 6.4% to end at 1,293.90 points.

“[The] Chinese market already suffered a blow in confidence after Monday and investors were in a very sensitive state of mind,” Zhang Yanbing, an analyst with Zheshang Securities, said. “So, they panicked and overacted today.”

In Sydney, the ASX 200 dropped 2.74% while in Southeast Asia, Singapore’s Straits Times Index fell by more than 2% in afternoon trading.

As for the Jakarta composite, it was down 1.7%, as was the KLCI in Malaysia. India’s Nifty 50 fell by nearly 2% at one point.

“It’s a bit of a bloodbath,” Ed Campbell, a senior portfolio manager at QMA, the asset management branch of Prudential Financial in New York, said. “It’s primarily the cumulative effect of interest rate moves over the past five days and news reports about trade impacting companies,” he added.

In Europe, London’s FTSE 100 edged lower in morning trading, losing nearly 2% while the German DAX and the French CAC 40 fell by more than 1%.

“This global stock market sell-off should not come as a big surprise, but the question that some investors will be asking is one of whether we will see a quick bounce back as we saw at the start of the year,” Helal Miah, an investment research analyst at The Share Centre, an independent British retail stockbroker, told the BBC.

The slump in key markets in Asia and Europe followed a decline on Wall Street overnight of nearly 830 points, which was the biggest fall since February.

A major reason for the downturn was looming uncertainty about the global economy caused by the trade war between the US and China, which has dragged on for months.

He has complained for weeks that the central bank has been hiking interest rates too quickly and that it risks choking off economic growth.

“I think the Fed is making a mistake. It’s so tight. I think the Fed has gone crazy,” Trump told the media ahead of a campaign rally for the US mid-term elections.

Investors have also become concerned about rising tension between Washington and Beijing in what has become a new Cold War.

The Chinese economy was already showing signs of cooling before tariffs worth $260 billion were slapped on the country’s exports entering the US.

At the weekend, the People’s Bank of China, or de facto central bank, announced plans to cut the reserve requirement for major lenders in order to pump up to $100 billion into the economy.

“The PBOC will continuously implement a prudent and neutral monetary policy, refrain from using a deluge of stimulus and focus on targeted adjustment to maintain sound and sufficient liquidity,” the PBOC said in a statement.

Chinese and Asian stocks have been under pressure since the yield on 10-year US Treasury bonds jumped above 3% last week.

Last week’s jump followed strong US data. But many analysts have been anticipating a change in the dynamics in the bond market due to expectations that central banks in Europe and Japan will soon phase out bond-buying programs.