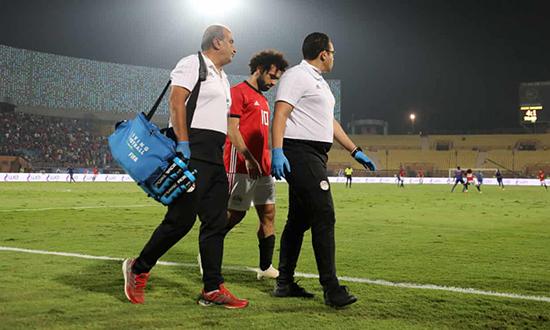 Mohamed Salah limped off towards the end of Egypt’s 4-1 win over Swaziland with a “muscle strain”. The Liverpool forward scored direct from a corner in the Africa Nations Cup qualifier in Cairo before appearing to suffer a hamstring injury. The Egypt assistant coach, Hany Ramzy, eased fears over the 26-year-old’s fitness by insisting it was “not a big injury”.

“The initial diagnosis confirmed that the injury is a muscle strain and there is no possibility of muscle rupture,” Ramzy said. “It is not a big injury. We support him with all our energy and we hope he will return as soon as possible.”

Austria beat Northern Ireland 1-0 in the sides’ Nations League Group B3 meeting in Vienna. A dull first half was followed by a livelier second, with West Ham’s Marko Arnautovic breaking through to score the winner on 71 minutes having been played onside by Jamal Lewis.

The defeat leaves Michael O’Neill’s side bottom of their group and in a relegation fight in the competition but O’Neill denied that should be a worry. “There’s three teams in the group and we’re bottom, so yeah,” he said.

“But what’s the significance of relegation in this competition? It means we will be playing in League C when it comes around again in two years. That’s not really our concern to be honest. We look at this competition and we want to do as well as we can but we want to develop the team as well.

“We had two under-21s in the team and another one on the bench, and we gave a player a debut. We can only develop the team by putting players on the pitch.

“Much has been written about the level of resource we have. If we are relegated from Group B it’s not a national disaster for us. There are good teams in League C and we’ll go and play against other countries in two years’ time. Qualification, if that is to happen, it will have to come through direct qualification for Euro 2020.”

On a low-scoring night in the Nations League Belgium beat Switzerland 2-1 in Brussels. Mario Gavranovic cancelled out Romelu Lukaku’s 58th-minute opener but Lukaku struck again on 84 minutes to seal the win. Greece defeated Hungary 1-0 and Finland beat Estonia by the same score.

Brazil beat Saudi Arabia 2-0 in a friendly in Jeddah, with the goals coming at the end of each half from Gabriel Jesus and Alex Sandro. In other friendlies Qatar beat Ecuador 4-3 and Colombia beat the USA 4-2. South Korea overcame Uruguay 2-1 and Japan beat Panama 3-0.