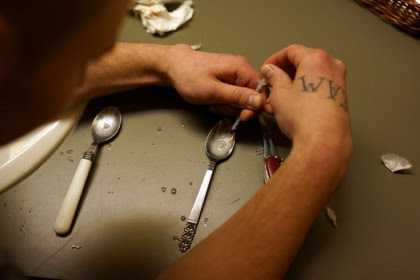 Death rate has increased dramatically over past decade

The number of drug-related deaths in England and Wales last year was the highest since records began, according to data from the Office for National Statistics.

Meanwhile, the death rate in Scotland was higher than those of any other country in Europe, and two-and-a-half times greater than that of the UK as a whole.

So how many people die from drug misuse in the UK each year and why is that figure increasing?

The process of gathering definitive data is complicated by the lack of a clear definition in the UK of what constitutes a drug death. This term can be used to describe anything from an accidental overdose or a suicide by overdose to deaths from driving while intoxicated or deaths from Aids among injecting drug users, says independent drug charity DrugWise.

Public Health England says that deaths involving opioids (such as heroin) account for the majority of drug poisoning deaths. Heroin-related deaths have more than doubled since 2012 to the highest number since records began two decades ago, according to the government agency.

Scotland has seen a similarly dramatic increase in drug deaths in the past decade. Last year, 934 drug-related deaths were registered, 66 (8%) more than in 2016, based on data from the National Records of Scotland. The 2017 total was the highest ever recorded in the country, and 479 (105%) higher than the figure for 2007.

Of the record number of deaths seen in 2017, the ONS found that around 70% were a result of “drug misuse” and accidental overdoses, with the highest number of such incidents involving people in the 40 to 49 age category.

The ONS also notes that the numbers of fatalities was boosted by a significant increase in deaths involving fentanyl, a powerful synthetic opioid used to manage severe pain, which killed 58 people in 2016 and a further 75 in 2017.

The drug “has been at the centre of a recent overdose crisis in the US and Canada, sparking a warning from Public Health England over the deadly mixing of heroin with fentanyl and other synthetic opiates”, The Independent reports.

In August, consultant addiction psychiatrist Dr Emily Finch told BBC Radio 4’s Today programme that funding for drug and alcohol treatment services in the UK had fallen by around 30% over the last five to ten years.

“Generally speaking, the system is less and less fit for purpose,” she said. “Being in treatment protects against deaths.”

Professor Fiona Measham, a member of the Advisory Council on the Misuse of Drugs, has also called for an increase for drug treatment funding.

“The big concern for us in relation to recreational drug users is the five-fold increase in Ecstasy deaths and the three-fold increase in cocaine-related deaths,” said Measham, who blames the rise on the “higher purity or contaminated substances being sold”.