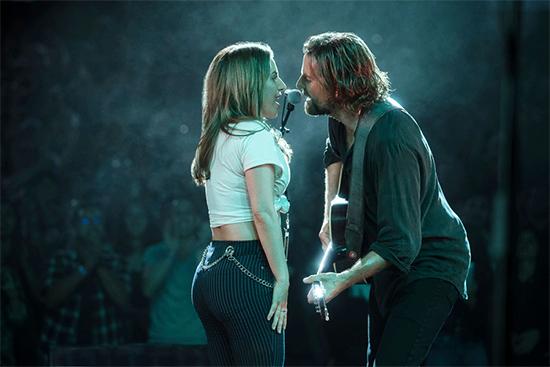 The release of A Star Is Born has sparked a beautiful, emotional, shared pop cultural experience. It begins with seeing the Bradley Cooper–directed, Lady Gaga–starring remake on or shortly after its release, crying a veritable ocean of tears, downloading and playing the duet “Shallow” on repeat, texting screenshots of said song to your group chat, pontificating on which Oscars will be won and by whom, and, finally, plotting second screenings to repeat the cycle all over again.

For those of us who were alive and of moviegoing age in 1997, this is a familiar, obsessive ritual—if you swap the texts and downloads for CDs and mixed tapes and replace Kate Winslet and Céline Dion with Gaga—because in many ways, A Star Is Born is the Titanic of 2018. Not since a frozen Leonardo DiCaprio sank into the ocean (letting go of a floating door he clearly fit on!) 21 years ago has a melodramatic-in-the-best-way romantic movie consumed us thusly.

The link between the two films has trickled out in reviews (“I won’t be surprised if this become’s [sic] the current young generation’s Titanic-esque love story massive hit,” tweeted Alex Billington of FirstShowing.net), on Twitter, and, crucially, in the aforementioned group text chains, which strongly suggest that the Jack-and-Rose stans of 1997 are rising again.

Sadly, Billy Zane is not in A Star Is Born (missed opportunity, Bradley Cooper!), but cosmic connections between 2018’s musical smash and Titanic abound. In the immortal words of “Shallow,” watch as we dive in. (Just beware, there will be A Star Is Born spoilers.)

The return of the rom-com is one thing—a very welcome thing. (Thank you, Netflix!) But Titanic and A Star Is Born are next level in their sweeping, big-screen, earnest love stories, wooing you with every intimate gesture (Jack Dawson painting Rose like one of his French girls, Jackson Maine peeling off Ally’s fake eyebrow). Both of these films will break down your defenses and make you feel like these people were born to be together and need each other like air. And if you think that’s cheesy, neither of them care! I’ll take it over another Mark Wahlberg thriller any day.

The utter, gut-punching tragedy. Let’s just say that there are two beautiful men named Jack with touchable hair and two untimely deaths that are very, very hard to accept. (A Star Is Born lays it on even thicker with the presence of Cooper’s real-life dog, Charlie.) Some people like to be scared senseless by watching horror movies. Others, like me, prefer the catharsis of sobbing into popcorn and Milk Duds. This is what Titanic and A Star provide in spades.

Any good, truly tear-jerking movie must have a tear-jerking companion song. Beaches had “Wind Beneath My Wings.” Baz Luhrmann’s Romeo + Juliet had Des’ree’s “Kissing You.” And, of course Titanic dominated old-school radio airwaves via its unescapable theme song, Dion’s “My Heart Will Go On,” which remains one of the best-selling singles of all time. Conveniently, A Star Is Born also has a booming breakout ballad (or several): There’s “Always Remember Us This Way,” “I’ll Never Love Again,” and the trailer-famous “Shallow,” which, when performed for the first time onstage by Gaga and Cooper, provides one of the film’s most glowing, magical moments. Perfect to sing along (and sob openly on the street) to. Gaga/Ally’s triumphant yell/howl of indistinguishable spelling in the song is also fodder for a great many memes.

Like Titanic before it, which won 11 Oscars, including Best Picture and Best Director for James Cameron, plus a Best Actress nomination for Winslet, A Star Is Born is poised to clean up this awards season. Though it’s still early, veteran awards-watcher Tom O’Neil at Goldderby.com likes its Best Picture odds, and there is buzz both for Cooper as director and actor, and for Gaga, which would surely result in one of the best acceptance speeches of all time.

A Star Is Born is, like Titanic, one of the rare recent films that looks like it will be both a popular box office success (it made more than $40 million in its opening weekend) and a respected “awards movie”—which would have made the Oscars’ over-before-it-ever-began “popular” category super tricky this year. Lending to A Star Is Born’s box office mojo is the fact that, also like Titanic, people seem intent upon seeing it more than once. Or, to borrow from Jackson Maine, they just want to take another look at it.

Cooper/Maine’s much-memed, out-the-car-window declaration that “I just wanted to take another look at you” is to A Star Is Born as “I’ll never let go” was to Titanic. Two awesomely cheesy, vaguely creepy lines that will surely go down in history.