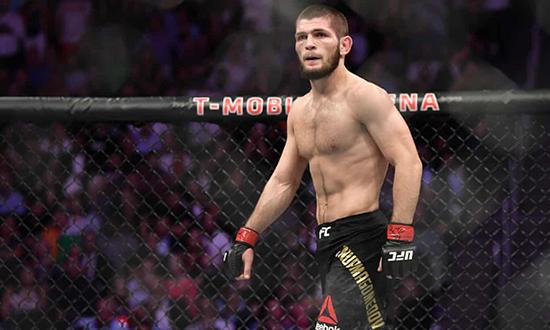 Khabib Nurmagomedov has challenged Floyd Mayweather to a showdown, telling his fellow undefeated fighter: “In the jungle there is only one king”.

Nurmagomedov extended his professional mixed martial arts record to 27-0 and retained his UFC lightweight title with a fourth-round submission victory over Conor McGregor at UFC 229 in Las Vegas last weekend. However, his win was overshadowed by an ugly post-fight melee. The Russian had his purse withheld by the Nevada Athletic Commission, which sanctioned the event, after leaping over the cage and attacking a member of McGregor’s team.  Both Nurmagomedov and McGregor have been given temporary suspensions by the NAC, pending a full investigation.

McGregor made a brief foray into boxing last year to take on Mayweather, who moved to 50-0 in the paid ranks by stopping the Irishman in the 10th round of their highly lucrative showdown. McGregor is believed to have made tens of millions of dollars from the fight.

In a video posted on Instagram by Mayweather CEO Leonard Ellerbe, Nurmagomedov said: “Let’s go Floyd. We have to fight now: 50-0 versus 27-0. We are two guys who never lose. [But] in the jungle there is only one king. Of course, I am the king because he cannot drop McGregor but I drop him easily. Let’s go.”

Mayweather did not knock down McGregor during their fight last year, but appeared to be toying with his opponent in the early rounds. He has not fought since overcoming McGregor but stated last month that he was coming out of retirement for a rematch with Manny Pacquiao.