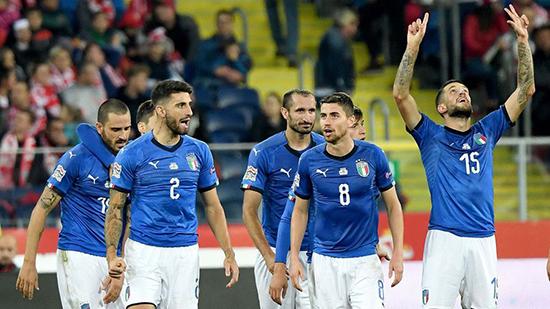 Italy lifted some of the recent gloom over their fortunes as Cristiano Biraghi scored a stoppage-time winner in their Nations League match with Poland.

Jorginho and Federico Chiesa both his the woodwork for Italy as they dominated the game but could not finish off their chances.

With the game looking set to end in a draw, Biraghi prodded home his first goal for Italy with only second remaining to win it for the visitors.

Tomer Hemed and Diaa Sabia made it two wins in a week for Israel as they followed up beating Scotland with a 2-0 victory over Albania.

Montenegro responded to losing to Serbia to win 4-1 in Lithuania, with Stefan Mugosa scoring twice before Boris Kopitovic and Darko Zoric completed the rout.

Russia beat Turkey for the second time in the Nations League Roman Neustadter and Denis Cheryshev gave them a 2-0 win in Sochi.

Romania and Serbia played out a 0-0 draw in Bucharest, while the Faroe Islands drew with Kosovo and Azerbaijan and Malta also played out a stalemate – both 1-1 draws.