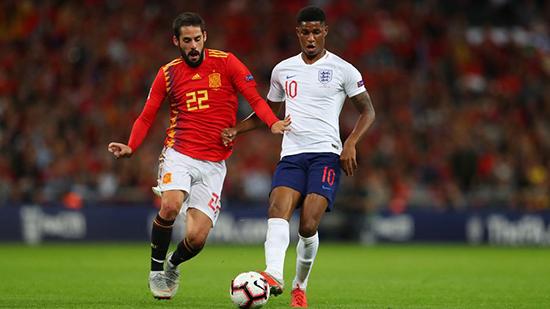 England face Spain in Seville on Monday night looking to build on their Nations League draw in Croatia.

Gareth Southgate’s side have picked up just one point from their opening two fixtures in the new tournament, while Spain started with victories over both Croatia and the Three Lions.

Here are a look at the talking points ahead of the clash at the Estadio Benito Villamarin.

Group B or not Group B, that is the question

England are without a win from their two Nations League matches to date, Friday’s stalemate in Croatia preceded by a 2-1 defeat at home to Spain last month.

With groups settled on a head-to-head basis if teams finish on equal points and Spain the favourites to progress, even a draw in Seville could be the difference between England remaining amongst the Group A elite for the 2020/21 edition.

While the Nations League has been derided by some, most notably Liverpool boss Jurgen Klopp, Southgate will be keen not to become the first England boss to suffer the ignominy of relegation.

Facing Spain in Seville was always going to be a challenge for England, but it is a test made more difficult by the fact both John Stones and Jordan Henderson are suspended.

The pair were shown yellow cards in the draw in Rijeka to add to their bookings in the opening Group A4 loss to Spain at Wembley and, as a result, will miss the return fixture.

With no further call-ups expected, it remains to be seen how Southgate fills the considerable void left by two of his most trusted players.

Borussia Dortmund forward Jadon Sancho became the first man to play for England born this side of the millennium when he came off the bench against Croatia.

Although it was just a short, 12-minute cameo for the 18-year-old, he looked lively and was hungry for the ball in an attempt to inspire a late win for Three Lions.

With Marcus Rashford misfiring and Raheem Sterling without an England goal in three years, Southgate could be tempted to give Sancho a chance from the start against Spain.

Luis Enrique was appointed as Spain manager following a disappointing World Cup which began with previous boss Julen Lopetegui sacked on the eve of the competition.

With a new generation of players now having to be blended with the experienced names, former Barcelona boss Enrique has started well.

A 2-1 win at Wembley in the reverse Nations League fixture last month got the ball rolling before Spain thumped Croatia 6-0 three days later – Wales were the next victims, beaten 4-1 in a friendly last week.

The pain for Kane can end with goals in Spain

England captain Harry Kane may have won the golden boot as the World Cup’s top goalscorer in the summer but the 25-year-old has not scored in his last six internationals.

If he does not score in Monday’s game against Spain in the same competition it will be the longest barren run of his senior England career.

With plenty of suggestion he needs a rest, Kane insists he is ready and raring to go in Seville as he eyes a first international goal since the last-16 victory over Colombia on July 3.