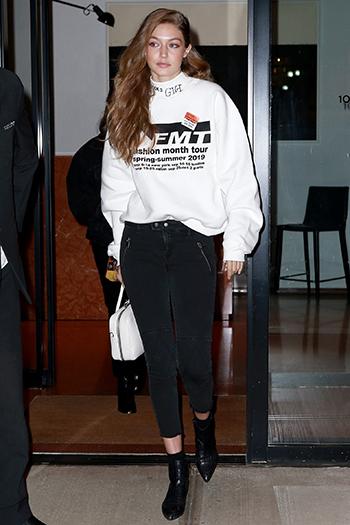 Models may traverse the globe to walk shows in international fashion capitals, but rarely do they come home with a wearable record of their accomplishments. After weeks spent abroad (Paris! Milan! London!) for work, Gigi Hadid stepped out in New York City this weekend wearing a piece of runway merch from Israeli brand Urban Sophistication. Dubbed the “fashion month tour crewneck,” the shirt puts a playful spin on the jet-setting schedules of those who make their living on the catwalk. With the dates of each city stamped across the front and a removable expiration date sticker, the piece is a tongue-in-cheek riff on the ironic slogan tee that’s tailor-made for fashion insider. It felt particularly right paired with other supermodel-off-duty staples, including black denim jeans and ankle boots.

Of course, Hadid isn’t the only model to get in on the action. In recent months rising runway stars such as Fran Summers, Mariana Zaragoza, and Tina Kunakey have all been spotted wearing the humorous tops on social media. Given the number of likes they’ve racked up, it’s only a matter of time before the coveted merch becomes a must have for everyone else.