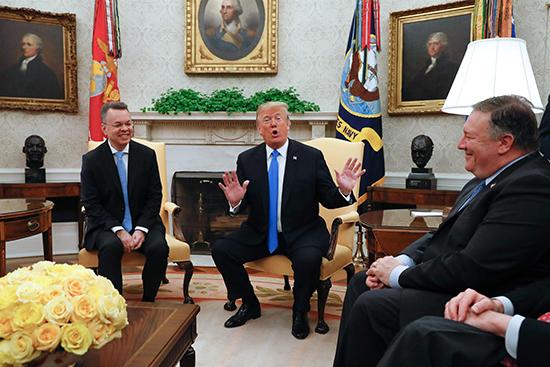 Welcoming to the Oval Office a pastor newly freed by a Turkish court, U.S. President Donald Trump hailed the release as turning a new page in Turkish-American ties.

“This is a tremendous step towards having the kind of relationship which can be a great relationship,” Trump said at the White House, welcoming pastor Andrew Brunson, ordered freed by a Turkish judge on Oct. 12.

“We feel much differently about Turkey today than we did yesterday. And I think we have a chance of really becoming much closer to Turkey and maybe having a very, very good relationship,” he added.

Brunson was arrested in December 2016 and charged in the Aegean province of Izmir with being a member of FETÖ, the group believed to have been behind a defeated coup earlier that year.

After being transferred this July from jail to house arrest, on Oct. 12 Brunson was sentenced to just over three years in prison, but released due to time served and his good behavior in custody.

The charges against him included spying for both FETÖ and the PKK, a group recognized as terrorist by Turkey, the U.S. and European Union.

Trump threatening and imposing sanctions on Turkey over the issue sparked bilateral tensions and spooked markets.

However, Trump has signaled that Brunson’s release could bring the NATO allies closer to each other.

While Brunson is originally from the state of North Carolina, he spent more than two decades in Turkey, and at the White House, he mentioned his affection for the country’s people.

“We do love Turkey. We were there for 25 years, and we love the Turkish people,” said Brunson.

“I know you do love the Turkish people, they’re great people,” Trump added.

On a related note, Trump on Oct. 13 thanked his Turkish counterpart Recep Tayyip Erdoğan for the release of the pastor.

“It will be wonderful to see and meet him. He is a great Christian who has been through such a tough experience. I would like to thank President Erdoğan for his help!” Trump had tweeted.

Also rebuffing media claims that Ankara and Washington made a deal to release the pastor, Trump said: “There was NO DEAL made with Turkey for the release and return of Pastor Andrew Brunson.”

In response to Trump, Erdoğan told his U.S. counterpart that the Turkish judiciary’s decision to release Brunson was an impartial one.

“Dear Mr. President, as I always stress, the Turkish judiciary made an impartial decision,” Erdoğan wrote on Twitter on Oct. 13.

Erdoğan also said he hopes Turkey and the U.S. will continue the cooperation that both allies deserve, adding that the countries are carrying out “joint efforts against terrorist groups, particularly the PKK, Daesh [ISIL], and FETÖ.”