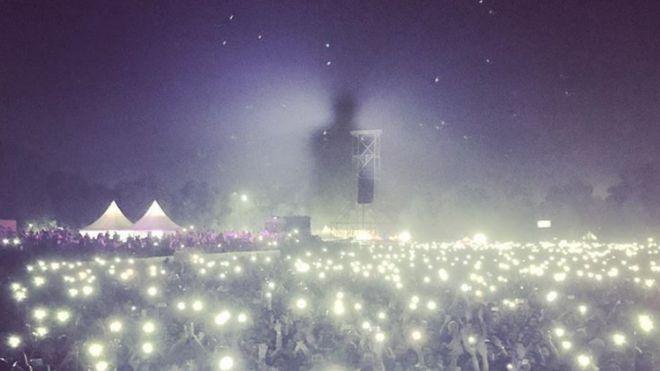 Canadian singer-songwriter Bryan Adams showed his love for his Indian fans on Sunday in a social media post that also brought attention to the country’s pollution problem.

He shared an image on Instagram of his shadow eerily cast into the dusty and smoky air above a concert crowd.

The post said the music veteran had “never seen” the phenomenon before, describing it as “magical”.

The Indian capital is the sixth worst place in the world for pollution, according to World Health Organisation (WHO) data.

Conditions in and around Delhi have deteriorated this week and are currently categorised as “poor”.

The photograph, which showed a ghost-like figure above concert-goers holding phone lights, was taken by Adams at Leisure Valley Park in Gurgaon, south-west of Delhi.

The singer is currently in the midst of a 66-date world tour, including five Indian dates.

In comments on his social media, Indian fans thanked him for a “legendary” performance at the concert, which was attended by thousands.

One user commented on the unusual “ghost” photograph effect: “All the Delhi pollution has come to some good use hahahahaha.”