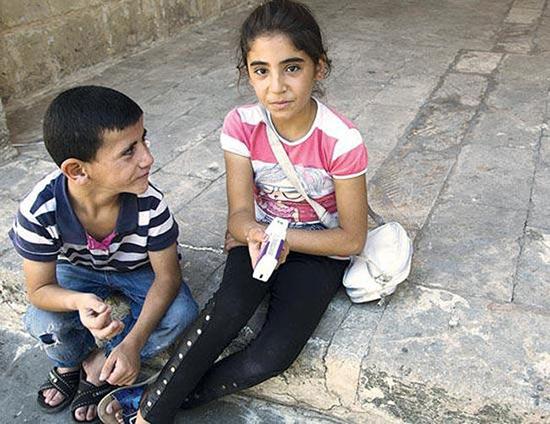 Turkey hosts nearly 3.5 million Syrians who have fled their war-torn country and over 46 percent of those refugees are children. However, a study, carried out by the Istanbul Political Research Institute (IstanPol) has shown the underlying feeling of Istanbulites towards Syrian refugee children is “fear.”

The study, sponsored by the Turkey office of the Germany-based Friedrich Ebert Foundation, was conducted with 25 individuals, between the ages of 19 and 66, who use the Zincirlikuyu-Beylikdüzü metrobus line to commute. This line was particularly chosen because it is used by people who live where Syrian children live and the line goes through the areas where they live.

The findings of the study were presented in a report titled “A study of perception: The ‘Ghost’ Syrian children on a journey in Istanbul.”

According to the report, Istanbulites are “afraid of Syrian refugee children,” and the title refers to this perception of locals. There are three reasons as to why the term “ghost” is used: Invisibility, fear and disregard.

Syrian children are invisible to Istanbulites, as even if locals feel sorry for them, the conditions they are in no longer bother them. Locals often chose the word “beggars” to describe those children.

Violence against those children, class differences and child labor have become a common occurrence in the eyes of Istanbulites.

According to the report, locals fear Syrian children will become criminals in the future.

Another finding in the report is that Istanbulites ignore and disregard Syrian children. It implies that locals ignore the needs of these children in the long term. Participants of the study have negative views of adult Syrian refugees as well. Those negative views of locals stem from economic and cultural concerns.

According to participants, the refugees are a burden on the Turkish economy. They also think Syrians have integration problems and will cause problems for Turkish society.

Based on their personal experiences on the Zincirlikuyu-Beylikdüzü metrobus line, participants of the survey conclude that the number of “foreigners” in Turkey has increased over the past years. Due to this perception, locals have also added they “feel like a stranger in their own country.” Even those who have come to Istanbul from other Turkish cities and have been living in the city for a long time share this view.

A half of participants of the study do not think it is possible to cohabitate and believe Syrianchildren should go back to their country with their families.

“When I think of them, the word ‘needy’ comes to mind. They [Syrian children] are deprived of the right to education. As if they are forced to grow up. My childhood and theirs are worlds apart. They are probably going through things that will have a negative impact on them in the long term. That is why I feel sorry for them,” said one participant.