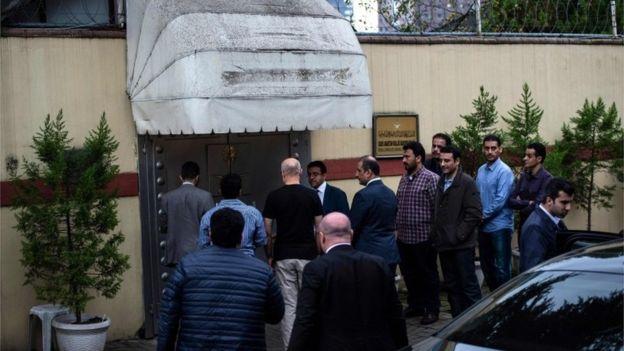 US Secretary of State Mike Pompeo is to meet Saudi King Salman amid growing controversy over the fate of Saudi journalist Jamal Khashoggi.

He will later visit Turkey, where Mr Khashoggi was last seen at the Saudi consulate in Istanbul two weeks ago.

The president provided no evidence to back his comment, but said that during a phone call the Saudi King had firmly denied knowing what had happened to Mr Khashoggi.

Early on Tuesday, Turkish police left the Saudi consulate where Mr Khashoggi was last seen after an overnight search.

It was the first time they had been allowed to enter the building since the journalist’s disappearance following disagreements between the two sides over the terms of any search.

However, unconfirmed reports in the US media suggest Saudi Arabia is preparing to admit that Mr Khashoggi died as a result of an interrogation that went wrong and that the original intention had been to abduct him.

Meanwhile, Arabic channel Al-Jazeera quotes Turkey’s attorney-general’s office as saying it has found evidence to back claims that Mr Khashoggi was killed inside the mission.

The issue has strained Saudi Arabia’s ties with its closest Western allies.

A Turkish security source has told the BBC that officials have audio and video evidence proving Mr Khashoggi was murdered inside the building.

Just spoke to the King of Saudi Arabia who denies any knowledge of whatever may have happened “to our Saudi Arabian citizen.” He said that they are working closely with Turkey to find answer. I am immediately sending our Secretary of State to meet with King!

How are the Saudis reacting?

Diplomatic pressure is growing on the Saudis to give a fuller explanation.

On Monday, King Salman ordered an investigation into the case.

“The king has ordered the public prosecutor to open an internal investigation into the Khashoggi matter based on the information from the joint team in Istanbul,” an official quoted by Reuters news agency said.

The official said the prosecutor had been instructed to work quickly.

On Sunday, Riyadh angrily rejected political and economic “threats” over the case of the missing journalist and said it would respond to any punitive action “with a bigger one”.

How was the consulate search conducted?

Turkish diplomatic sources had said the consulate would be searched by a joint Turkish-Saudi team.

Yet another intriguing development at the Saudi Consulate today before Turkish police force arrival for inspection.

Cleaners inside the building where #Khashoggi vanished pic.twitter.com/gidlySU21E

Saudi Arabia agreed last week to allow Turkish officials to conduct a search but insisted it would only be a superficial “visual” inspection.

Turkey rejected that offer. The Sabah daily newspaper said investigators had wanted to search the building with luminol, a chemical which shows up any traces of blood. It is not clear whether that happened.

Encouraged by the state-controlled media, many Saudis have been rallying round their leadership. There is even a popular rumour that what happened in Istanbul is all a plot by Qatar and Turkey to discredit the blameless Saudi kingdom.

But privately, others are now questioning whether the 33-year-old Crown Prince Mohammed Bin Salman, the man once hailed as a visionary saviour of Saudi Arabia, has gone too far.

He has pitched his country into a costly and seemingly unwinnable war in Yemen. He is embroiled in a damaging dispute with neighbouring Qatar. He has quarrelled with Canada over human rights and he has locked up dozens for peaceful protest while alienating many in royal and business circles.

More conservative Saudis may well be hankering for quieter times.

What allegedly happened in Istanbul?

Mr Khashoggi, a critic of the Saudi government who has written for the Washington Post, was last seen walking into the consulate on 2 October.

Reports suggest an assault and struggle took place in the consulate after Mr Khashoggi went to get paperwork for his forthcoming marriage.

Turkish sources allege he was killed by a 15-strong team of Saudi agents but Riyadh insists that he left the consulate unharmed.

Mr Khashoggi was once an adviser to the Saudi royal family but fell out of favour with the Saudi government and went into self-imposed exile. He is a US resident.

What other reaction has there been?

The European Union has joined calls for a transparent investigation.

Meanwhile, more leading business figures say they will not attend a major investment conference in Riyadh later this month.

The international conference, starting on 23 October, has been dubbed “Davos in the Desert”, though the World Economic Forum says it has nothing to do with its annual event in the Swiss Alps.

Officially entitled the Future Finance Initiative, the Saudi conference describes itself as an “international platform for expert-led debate between investors, innovators and governments as well as economic leaders”.

Significantly, it was expected to showcase the reform agenda of Saudi Crown Prince Mohammed bin Salman.