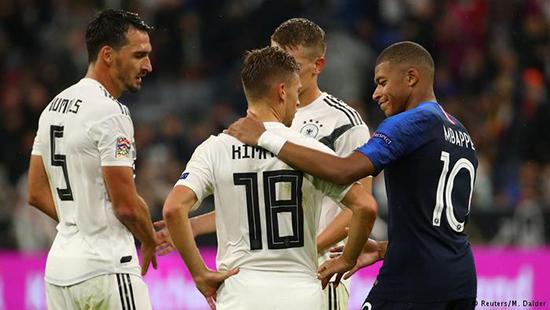 Nearly four months after their embarrassing elimination from the World Cup, Germany could be on the brink of another football humiliation. DW explains how the Germans can avoid relegation in the Nations League.

With one point after two Nations League matches, Joachim Löw’s men are in the endgame once again.

Should they lose their next fixture against France in Paris’ Stade de France on Tuesday, Germany would become the leading candidate for relegation from Group 1 of League A.

For a country that is only four months removed from one of their worst World Cup showings ever, being a tier removed from Europe’s international elite would be another humiliation — even if some don’t put much credence into the continent’s newly formed competition.

However, a Germany win or a draw in Paris will keep their Nations League survival alive and force the Netherlands, who beat their European neighbors 3-0 on Saturday in Amsterdam, to do well in their last two Nations League fixtures.

As Germany’s loss in the 2016 European championship proved, getting a good result against the French on their turf is a tall task. Holding the world champions to a 0-0 draw in September was hard enough. That said, here’s how Löw’s side can get the job done against the reining world champions.

Give young guys a chance

Löw has stuck with his experienced players through thick and thin, largely ignoring calls from his critics to go with younger players in his squad.

The Germany coach will already be forced to make some changes — Jerome Boateng has left the team after picking up an injury against the Netherlands. Niklas Süle, who started for Boateng when the 30-year-old defender was serving a red card suspension at the World Cup, is likely to get the start next to Bayern Munich teammate Mats Hummels.

But why stop there? Leroy Sane had flashes of brilliance when he came off the bench on Saturday, nearly scoring an equalizer for Germany before the wheels came off. Julian Brandt, who scored against Peru in September, also impressed as a substitute against the Netherlands.

Both of those players have the speed and the skill to make the game uncomfortable for France’s defense. Given Thomas Müller’s poor run of form — he has two goals in 14 appearances since the start of 2017 — one or both should get a chance to start in Paris.

Creating scoring opportunities has not been a problem for Germany in 2018. They averaged 24 shots-per-game in their three World Cup games, unleashed 13 shots against France in September and 21 shots against the Netherlands over the weekend.

Löw’s men have just been terrible at converting scoring chances they create. They scored just twice at the World Cup and they have yet to score in the Nations League. What’s more, less than a third of their shots in both competitions have been on target — by contrast, France have put more than half of their shots on target in Nations League play.

Müller, Sane and Timo Werner had golden scoring opportunities for Germany against the Netherlands, but none of their efforts tested Dutch goalkeeper Jasper Cillissen. Getting those shots on target will make Germany’s attack more potent and may finally give them a lead with which to work.

Turnovers in bad positions caused Germany to completely unravel on Saturday, quickly turning a one-goal deficit into a three-goal shellacking. But even before the Dutch increased their lead, Löw’s side was carelessly giving the ball away, even in their own half.

That kind of sloppy play will not fly against the defending champions. Didier Deschamp’s men feasted on their opponents’ mistakes at the World Cup, using their athleticism to move quickly up the field and score.

France have happily allowed their adversaries to hold the ball while waiting for the perfect moment to strike. It is therefore paramount that Germany remained disciplined, make quicker decisions and avoid turning the ball over when they are in possession.

A good disciplined performance can do a lot of good for a team in turmoil. With one point in their first two Nations League games, Germany does not have much room for error, and mishaps could cost them a place in League A in two years time.