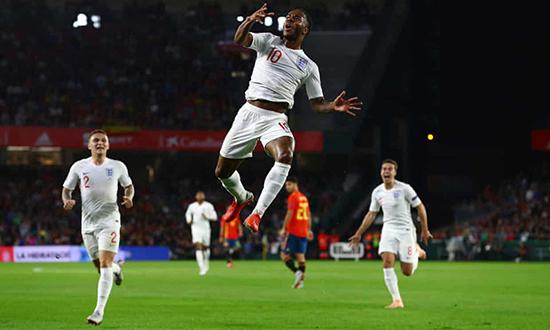 Where to start? It was a wild, epic night and, ultimately, these are the occasions England ought to cherish. Any victory against a team of Spain’s calibre has to be celebrated but the narrative of this performance should bring back all the feelgood factor from the World Cup and makes it, without exaggeration, one of the more pleasurable nights of England’s modern history.

It was the night when Raheem Sterling, in 22 first-half minutes, doubled his England goal tally from the previous six years. Harry Kane’s run without a goal is now seven games but, seriously, who cares when the captain plays this effectively? Marcus Rashford added England’s other goal, all coming in the first half, and when Spain gave everything to tryto pull off a remarkable feat of escapology Gareth Southgate’s players held out – just – in the face of a sustained onslaught.

True, they came perilously close to being worn down during those nerve‑shredding moments when Spain laid siege to Jordan Pickford’s goal. Ultimately, though, England are entitled to think they deserved this victory regardless of the fact that Spain had 73% of the possession and four times as many efforts at goal. England were more clinical with their execution. They defended better and at half-time their 3-0 lead was an accurate reflection of their superiority. Ten minutes into the second half there were even the first olés drifting down from the most vertiginous part of this old concrete bowl where England’s fans were happily congregated.

Most of those supporters might have wondered beforehand whether England’s first dalliance with the Nations League might end in relegation. Now they improvised with chants of “we are staying up” and queried, en masse, whether their opponents might be Scotland in disguise.

Except it was inconceivable England would have everything their own way. Spain hit back with a brilliant header from one of their substitutes, Paco Alcácer, and there were times, even with a 3-1 lead, when England looked dangerously close to being overwhelmed. Spain can do that to the best of opponents and Luis Enrique’s team could conceivably have saved themselves with a bit more luck and some improved accuracy with their finishing.

To hold out was a triumph in itself for England and, when Sergio Ramos headed in Spain’s second goal, seven minutes into stoppage time, it turned out to be the final act of the night. Szymon Marciniak, the Polish referee, did not even let the game restart.

Even more remarkable, this was England’s youngest team since 1959. Southgate’s starting lineup had an average age of just over 23 and there was only one player, Kieran Trippier, above 25. Sterling was the most experienced of England’s first-team picks, winning his 46th cap at the age of 23. It was also, without question, his finest performance and a reminder why Southgate has persevered with him during the long periods when Sterling has found it difficult to replicate his Manchester City form.

He had not scored for England since a Euro 2016 qualifier against Estonia in October 2015 but his performance here was a fine riposte to his critics. His first goal, in particular, was also conclusive evidence that his confidence had not been too badly affected. It was his first in 30 hours and 23 minutes for his national team and that set the tone for the remainder of the first half: the best England have played, feasibly, since the 5-1 win in Germany in September 2001.

The sight of England taking a three-goal lead inside the opening 38 minutes was certainly a sensation, given Spain had won their previous Nations League tie 6-0 against Croatia. The home nation streamed forward in the opening exchanges and, in those moments, England’s supporters might have been forgiven for fearing the worst.

Instead it was difficult to remember the last time Ramos, for one, has looked as vulnerable as he did during those wonderfully slick exchanges when England’s new 4-3-3 shape, with Sterling and Rashford either side of Kane, fully flowered. England’s three attackers all rose to the occasion, with Kane involved in all the goals. Behind them Eric Dier had his best game for some time and, early on, signalled England’s mood with a memorable challenge on Ramos. Harry Winks justified his selection and Ross Barkley played much more confidently than he had in Croatia three days earlier.

Southgate might even reflect that his team should have scored more during that period of the first half when they opened up the Spanish defence with a regularity that was, frankly, bordering on absurd. Kane and Rashford set up Sterling to elude a wonky offside trap and sweep in the opener. Rashford’s goal also originated from the same route: Pickford picking out Kane with a measured kick up the pitch. Kane peeled away from Ramos and his pass was beautifully weighted for Rashford to slip his shot beyond David de Gea, his Manchester United colleague.

With not even half an hour played, this was extraordinary enough – but England were greedy for more. Spain, in stark contrast, looked in need of smelling salts and it would get even worse for the hosts before the interval. Again Kane played a decisive role. Barkley picked him out at the far post and Kane turned the ball across the six-yard area to leave Sterling with a close-range finish.

England came under such concerted pressure in the second half that Southgate brought on Kyle Walker and switched to a back five. Pickford had some hairy moments, including one near-calamity when he tried a Cruyff turn in the penalty area, lost the ball to Rodrigo and had to slide-tackle him to prevent what seemed like a certain goal.

Alonso put one stoppage-time header against the crossbar and England, with Nathaniel Chalobah coming on for his debut late on, faced some almost unremitting pressure before Ramos finally beat Pickford for a second time, from Spain’s 22nd effort of the night. It was too late and Southgate spoke afterwards about the bravery of his players. England could celebrate their first victory in Spain since 1987 and Southgate’s courage had also been rewarded in selecting, and trusting, such an inexperienced team.