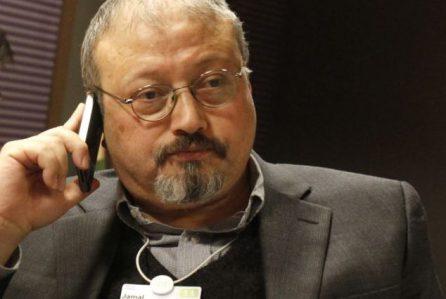 After President Donald Trump played canary in the coal mine for them, the Saudi royal family is getting ready to acknowledge this evening that Washington Post columnist Jamal Khashoggi was killed in the Saudi consulate in Istanbul during an interrogation/kidnap gone wrong.

The intention had been to kidnap, not kill, the 59-year-old critic of the royal family when he visited the consulate on October 2, CNN is reporting, citing two unnamed sources. The Washington Post contributor went there to pick up paperwork he needed to marry his Turkish fiancee, Hatice Cengiz.

The Saudi royal family is going to say Khashoggi was killed without their clearance, that they only meant to torture and kidnap him, and those involved will be held responsible, CNN reports. Khashoggi may have been cut up to expedite his removal from the building.

Pundits say the new killed-by-accident storyline protects Jared Kushner pal, Royal Prince MBS, and his “transforming Saudi Arabia” brand.  It’s not clear who the Saudi ruling family elected to be thrown under the bus to take responsibility for the call to kill Khashoggi.

The royal family had settled on this stinko script as Turkish forensic specialists still were inside the consulate. They had showed up at the building not long after Saudis hired a cleaning crew to tidy up the place, seen on camera arriving with tools of their trade.

Word of the the major acknowledgement came a few hours after President Donald Trump tested the script on reporters to gauge their reaction during a pop-up presser on the White House lawn.

Trump told reporters he’d spoken to the Saudi king, who assured him they had not ordered Khashoggi’s extermination, and suggested helpfully it may have been the work of a “rogue killer.”

The Saudi royal family previously had insisted Khashoggi left the consulate the same day he entered. Turkey, however, insisted it had evidence the journalist was murdered in the building.

A critic of the royal family, Khashoggi had been living in self-imposed exile in Virginia for a year, saying he feared retribution for his views.