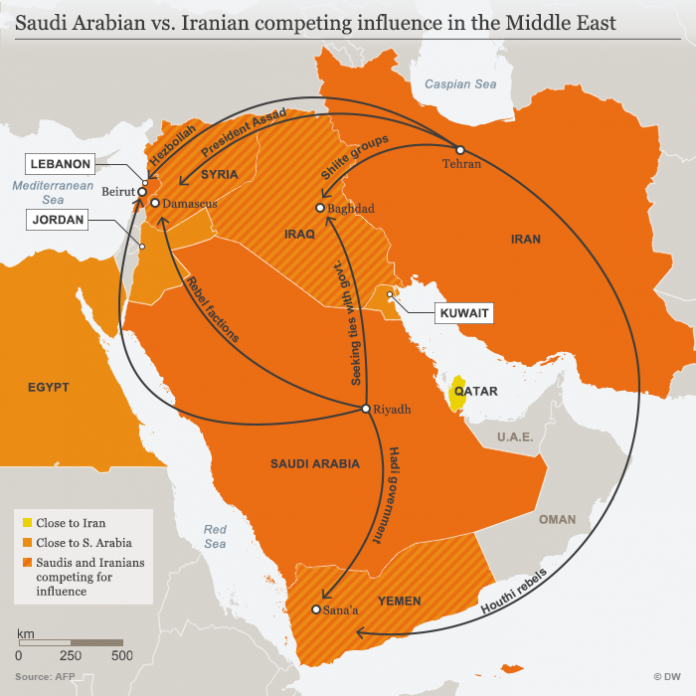 Donald Trump isn’t just maintaining an alliance with Saudi Arabia—he’s choosing it over the rest of the world.

Contrary to what some people seem to think, the United States has not been withdrawing from the Middle East, and the region is not descending into chaos because Washington has checked out. True, the total number of U.S. troops there is substantially lower than its Iraq War peak, but the region was hardly stable when 150,000-plus troops were there. In any case, that unhappy episode was (fortunately) an unusual aberration and not the baseline. The United States still has roughly 25,000 military personnel in various places in the region, including several thousand troops fighting the remnants of the Islamic State and trying to counter Iranian influence, a naval flotilla based in Bahrain, a big and active air base in Qatar, and an unspecified number of Special Forces troops and covert operatives active in a variety of other countries, most of them engaged in counterterrorism operations of one kind or another.

Far from disengaging from the region, President Donald Trump has if anything doubled down on U.S. support for America’s traditional Middle East client states. He has welcomed Egyptian strongman Abdel Fattah al-Sisi to the White House and continued to lavish U.S. economic and military aid on Sisi’s military dictatorship. He has moved the U.S. Embassy in Israel to Jerusalem to keep big-time Republican Party donor Sheldon Adelson happy, appointed a zealous defender of Israel’s settler movement as U.S. ambassador, and has a nice bromance going with Prime Minister Benjamin Netanyahu. Trump has also embraced Saudi Crown Prince Mohammed bin Salman, a supposedly reformist leader, along with the Saudis’ close allies in the United Arab Emirates.

Most importantly, Trump, Secretary of State Mike Pompeo, and National Security Advisor John Bolton all subscribe to the Saudi-Israeli-Egyptian-Gulf states line on Iran. Trump endeared himself to each of these governments by withdrawing from the Iran nuclear deal, and the administration has ramped up its denunciations of Iran’s support for terrorism and its supposedly destabilizing regional activities. (For a more accurate and measured view of this problem, see Paul Pillar here). The Obama administration had repeatedly insisted that “all options were on the table,” but its larger goal was to create a situation where war with Iran would be unnecessary. Trump has reversed that approach, and some observers now fear that war is where he (or his chief advisors) wants to go.

Ladies and gentlemen, this policy is not withdrawing from the region. Indeed, what’s remarkable about the decision to double down on the U.S. commitment to its traditional clients is that it is occurring during a period when each of these allies is becoming less deserving of unconditional U.S. support. If ever there were a time for the United States to indicate its disapproval of each state’s conduct, distance itself somewhat, and start exploring other options, it would be now.

In Egypt, Sisi has crushed any hope of democracy, killing protestors and imprisoning hundreds if not thousands of dissidents, mostly on dubious grounds. Although the Egyptian economy has improved, corruption remains rampant, and the government has recently imposed ominous new restrictions on freedom of expression. Trump clearly has a soft spot for strongmen and is obviously untroubled by corruption, but is this really the sort of government the United States should be backing to the hilt?

Meanwhile, Israel continues its rightward march away from democracy and toward apartheid, as settlements in the occupied territories continue to grow and as dozens of Palestinian civilians are gunned down on the Gaza border. Even longtime supporters of Israel are increasingly alarmed by its current trajectory, and some of them—including my old editor (and sometime antagonist) David Rothkopf—are saying so openly. But you wouldn’t know that looking at Trump’s enthusiastic embrace.

As for Saudi Arabia, it is becoming abundantly clear that Mohammed bin Salman is not a progressive reformer. On the contrary, he has revealed himself to be a headstrong, vengeful, and not very competent leader who has done an impressive job of consolidating power and a miserable job of using it. He has badly mishandled relations with Lebanon and Qatar and gotten the Saudi military bogged down in a brutal war in Yemen, thereby tarnishing the kingdom’s international reputation. Moreover, his erratic and willful behavior is scaring off the foreign investors whom he needs to develop the Saudi economy and eventually reduce its reliance on oil exports. Add to that record of failure the alleged murder of the dissident journalist Jamal Khashoggi—who posed no real threat to the regime—and it’s hard to justify unconditional U.S. support for Riyadh either.

Yet the Trump administration seems more than willing to look the other way. This is partly due to greed, as reflected in Trump’s statement that getting tough on Saudi Arabia might jeopardize arms purchases by the kingdom, but also the result of having bought into the Saudi-Israeli-Egyptian-Gulf line about Iran. In addition to leaving the nuclear deal, this policy also required threatening the European Union with secondary sanctions should it try to sustain the agreement and continue to trade with and invest in Iran. America’s European allies are deeply resentful of U.S. bullying, in part because it will cost them lucrative business opportunities but also because they understand that Trump’s decision to abandon the nuclear deal was a strategic blunder.

Step back for a second and consider what this means. Under Trump, the United States is jeopardizing relations with long-standing democratic allies in Europe and giving them additional reason to create an alternative to the U.S. dollar-based financial system. It is doing this in order to gratify a set of increasingly problematic Middle East clients. Does such a swap make strategic or moral sense?

Mind you, I’m in favor of an amicable divorce between the United States and Europe, one where Washington gradually turns European security issues back over to Europeans themselves while remaining diplomatically and economically engaged. This step should be undertaken not in sorrow or anger but out of a desire for these wealthy democracies to be more self-reliant. Instead of trying to keep Europe docile and dependent forever, Americans should take pride in a job well done and look forward to trading with, investing in, and going to visit their former partners. The United States just wouldn’t be Europe’s first line of defense anymore. Unfortunately, Trump’s policies are making it more likely that a future split with Europe will be as bitter and contentious as possible. The man is something of an expert on nasty and expensive divorces; I just wish the rest of us didn’t have to be a party to his next one.

Finally, the claim that the Middle East is going to hell in a handbasket because the United States is disengaging gets it exactly backward. Large-scale U.S. interference didn’t do a lot to stabilize the region in the past, as the United States should have learned from its unhappy experiences in Iraq, Libya, Yemen, and elsewhere. More importantly, the negative trends discussed above are the result not of U.S. disengagement but of excessive and uncritical U.S. support. America’s Middle East clients aren’t misbehaving because they think the country is getting out; they’re acting recklessly because they think Trump will back them up no matter how badly they behave. If the jungle is growing back, as Robert Kagan seems to think, it is not because the United States isn’t pruning and weeding. The real problem is that it keeps adding fertilizer.

This whole sad saga should surprise no one. When the president doesn’t know much about foreign policy, when he leaves lots of top foreign-policy jobs unfilled (including key ambassadorships), and when he takes the advice of a spoiled rich kid whose sole qualification for a senior White House post is that he married the president’s daughter, a competent or principled performance in office is not to be expected.