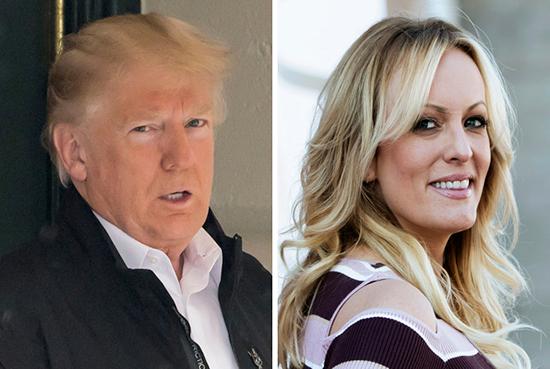 “In the Special Motion, Mr. Trump argues that the tweet at issue is a non-actionable opinion, not a statement of fact about Ms. Clifford,” said U.S. District Judge James Otero in an order released today three weeks after anti-SLAPP arguments were heard over POTUS’ harsh April 18 tweet calling Daniels AKA Stephanie Clifford’s sketch of a rather scary man that she says threatened her in Vegas in 2011 warning her off going public at that time with her short-lived and apparently unfulfilling intimate encounter with Trump back in 2006.

Clifford’s quick to the draw lawyer Michael Avenatti was back on the media and legal offense almost immediately after the judge’s ruling:

“In making the statement, Mr. Trump used his national and international audience of millions of people to make a false factual statement to denigrate and attack Ms. Clifford,” stated the original April 30 defamation filing in New York Supreme Court by Daniels lawyer Michael Avenatti after Trump let off on social media. “Mr. Trump knew that his false, disparaging statement would be read by people around the world and that it would get a lot of press coverage, and that Ms. Clifford would be subjected to threats of violence, economic harm, and reputational damage as a result,” the 7-page document of the matter, which was moved out West subsequently, added.

“The Court agrees with Mr. Trump’s argument because the tweet in question constitutes “rhetorical hyperbole” normally associated with politics and public discourse in the United States,” Judge Otero said Monday in his 14-page ruling (read it here). “The Court holds that Mr. Trump’s tweet is ‘rhetorical hyperbole’ and is protected by the First Amendment,” Judge Otero said furthermore and telling of the state of political discourse in America in 2018. Plaintiff cannot amend the Complaint in a way that challenges this holding.”

With that, and other legal battles between Trump and Daniels in other jurisdictions still on-going and not at all hampered by today’s ruling, it became a showdown between the lawyers.

Taking to social media soon after the decision came down and before actually filing that appeal, potential Presidential candidate and cable news regular Avenatti had his own first draft spin on what it all meant and where it could all end, or not:

Re Judge’s limited ruling: Daniels’ other claims against Trump and Cohen proceed unaffected. Trump’s contrary claims are as deceptive as his claims about the inauguration attendance.

We will appeal the dismissal of the defamation cause of action and are confident in a reversal.

You know this isn’t really over and they’ll certainly be more tweets from Trump and Avenatti on the matter.