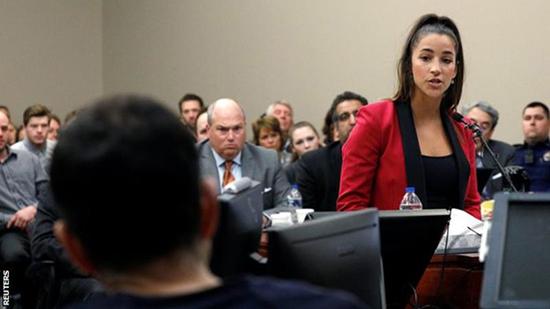 Nassar has been sentenced to more than 300 years in jail for abusing gymnasts.

In 2016, Kaepernick protested against racial injustice by kneeling during the US national anthem, a gesture which has proved divisive in the country and drew criticism from President Donald Trump.

However, Raisman said it was the former congresswoman’s role at Faegre Baker Daniels which troubled her.

In a series of tweets, she pointed out how lawyers at the firm, though not Bono, and sport administrators had been aware of abuse allegations against Nassar in 2015 yet he was allowed to continue working – and abusing children.

When her appointment was announced on Friday, Bono said: “I look forward to working with the entire gymnastics community during these challenging times to create a safe, supportive and healthy environment.”

Bono worked on legislative strategies and policies for the firm and was not involved in the Nassar case.

Nassar was sentenced to 60 years in prison on child pornography charges in December and received up to 175 years in jail on sexual abuse charges in January. He then received a further 40 to 125 years in February for molesting young gymnasts.

More than 300 people have said they were assaulted by him.

The long-term nature of the abuse, coupled with a failure of authorities to act, prompted widespread resignations in gymnastics and from the US Olympic Committee as the scale of Nassar’s activity become known.

Bono’s predecessor at USA Gymnastics, Kerry Perry, resigned in September just nine months after taking up her role, having been criticised for her handling of the fallout from the Nassar scandal.

Former president Steve Penny resigned in 2017 after being accused by victims of failing to notify authorities quickly about abuse allegations.