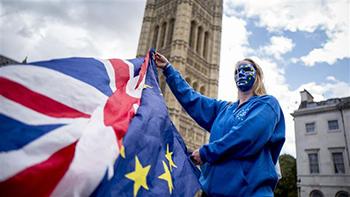 Prime Minister Theresa May is heading into a crucial 48 hours for her Brexit plan under intense scrutiny, after a third of her top team met over pizza in the Commons last night to discuss concerns about her approach.

The key sticking point is the Irish border issue, and in particular the so-called backstop, amid fears that further concessions to the EU may involve the UK staying tied to the bloc’s customs rules far beyond the end of the proposed transition arrangement.

Ministers at the informal summit – who included Dominic Raab, Jeremy Hunt, Michael Gove, Penny Mordaunt, Chris Grayling, Liz Truss, Andrea Leadsom and Geoffrey Cox – expressed concerns that May “must commit to a hard deadline after which point her time-limited version of the backstop would end”, reports the BBC.

The presence of Raab – May’s new Brexit secretary – at the meeting “will be of some concern to No. 10, as will the names of erstwhile Remainers Hunt and Truss”, says Politico.

However, the BBC reports that no Cabinet resignations are imminent.

This claim appears to be backed up by a source who told Political that the meeting was “productive and positive”. “There’s still a general belief the PM can deliver a backstop that can be supported,” the insider said, but added that “concerns are still there”.

These lingering concerns will see Leadsom today “challenge [May] to set a firm date for when Britain will finally leave the EU’s customs union”, The Sun reports.

Some ministers “seem a little unsettled at all the attention on their summit”, says Politico’s Jack Blanchard.

One Cabinet source told The Times the event was merely “a social thing that’s got blown out of all proportion”. Another asked HuffPost: “When did sharing a slice of pizza with colleagues become evidence of sedition?”

The meeting came at the beginning of a crucial two days for the PM as she attempts to win over both senior members of her own party and EU leaders ahead of this week’s European summit.

European Council President Donald Tusk has invited May to make a personal appeal to the leaders of the other 27 nations, who will then meet tomorrow at a dinner from which she is excluded, to discuss Brexit.

However, in a letter to EU leaders, Tusk yesterday cautioned that the likelihood of a disorderly Brexit had increased, as talks had “proven to be more complicated than some may have expected”.

“We must prepare the EU for a no-deal scenario, which is more likely than ever before,” he said.

May faces increased pressure from within her own party to change tack or risk having any prospective deal voted down.

“I’m afraid there’s something of a grizzly job to be done here,” Brexiteer Steve Baker told the BBC‘s Newsnight yesterday. “Either the Cabinet tomorrow need to change the prime minister’s mind on where she’s going – or it’s clear that if a Chequers-based deal comes back it will be voted down.”