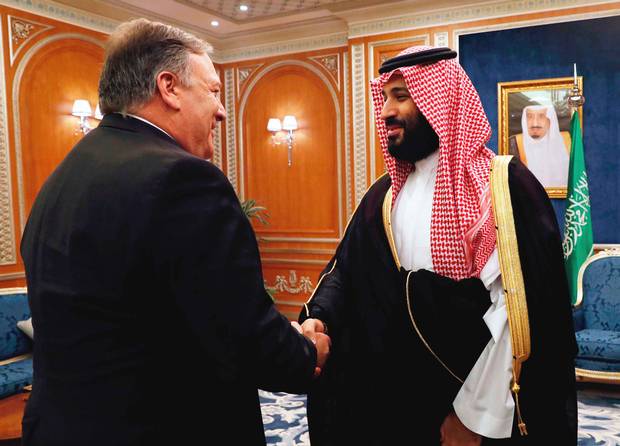 Police and prosecutors on Monday inspected the consulate building in Istanbul for more than eight hours and yesterday widened their search to include the Saudi consul’s residence, a short distance away.

Surveillance footage shows vehicles moving between the consulate and the consul’s home after Mr Khashoggi’s disappearance.

Turkish officials believe Mr Khashoggi was killed and dismembered inside the consulate nearly two weeks ago. According to reports, the government has an audio recording which they have shared as evidence with Saudi Arabia and the US.

“My hope is that we can reach conclusions that will give us a reasonable opinion as soon as possible, because the investigation is looking into many things such as toxic materials and those materials being removed by painting them over,” Mr Erdogan told reporters in Ankara.

US President Donald Trump later said that Saudi Crown Prince Mohammed bin Salman denied knowledge of the disappearance of Mr Khashoggi and said the Saudi government will expand an investigation into what happened.

“Just spoke with the Crown Prince of Saudi Arabia who totally denied any knowledge of what took place in their Turkish Consulate,” Trump said on Twitter yesterday, adding in a separate tweet that Prince Mohammed said “he has already started, and will rapidly expand, a full and complete investigation into this matter. Answers will be forthcoming shortly.”

Prince Mohammed had agreed yesterday that there must be a thorough investigation into the disappearance of Mr Khashoggi, the US said, after media reports that Riyadh will acknowledge he was killed in a botched interrogation.

Officials from the kingdom were expected to lay out a series of events that blamed intelligence operatives, and shielded the crown prince, from responsibility over the journalist’s death.

Mr Trump, after speaking to Saudi Arabia’s King Salman, suggested “rogue killers” could have been behind the death of Mr Khashoggi, who was a US permanent resident and wrote columns for the ‘Washington Post’.

He also dispatched Mike Pompeo, his secretary of state, to fly directly to Riyadh to meet the king and seek answers.

Saudi Arabia was said to be preparing a report that would confirm Mr Khashoggi was killed as a result of interrogation that went wrong, CNN reported, citing two unnamed sources.

One source cautioned that the report was still being prepared and could change.

The other source said the report would probably conclude that the operation was carried out without clearance, and that those involved will be held responsible.

Another person with knowledge of how Saudi Arabia intends to explain the episode told the ‘New York Times’ the crown prince had approved an interrogation, or rendition back to Saudi Arabia, of Mr Khashoggi.

But the kingdom intended to say that a member of its intelligence services, who happened to be a friend of the crown prince, had been “tragically incompetent” in trying to prove himself during the operation, the newspaper reported.

Following his first phone call with King Salman about the crisis, Mr Trump said the monarch had “firmly denied” his state was behind the killing of Mr Khashoggi.

Speaking on the White House lawn, Mr Trump said: “It sounded to me like maybe it could have been rogue killers, who knows?

“We’re going to try get to the bottom of it very soon, but his was a flat denial.”

Turkish officials had already speculated that the Saudi government would blame “rogue” elements within its security services as a way of protecting the crown prince.

King Salman had ordered Saudi prosecutors to launch an internal probe after two weeks in which Riyadh did little except issue blanket denials of responsibility.

The apparent shift in the Saudi position came as the kingdom remained under intense pressure from Washington and business leaders over the Khashoggi case.

The White House said it expected Saudi Arabia to carry out “a swift and transparent” investigation this week. (© Daily Telegraph London)