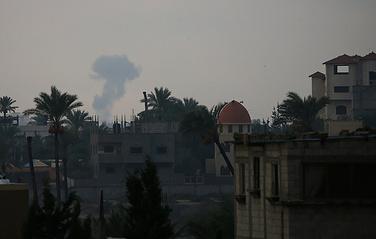 TEL AVIV, October 17. /TASS/. Israel has decided to close all checkpoints on the border with the Gaza Strip and reduce the fishing zone in the Mediterranean Sea near the enclave from nine nautical miles (16.5 km) to three nautical miles (5.5 km) in response to missile attacks on Israeli territory, the press service of the Israeli Ministry of Defense reported on Wednesday.

“Minister of Defense Avigdor Lieberman has ordered to close the Erez Crossing [used by civilians – TASS] and the Kerem Shalom Crossing [used for cargo transportation – TASS], as well as reduce the fishing zone near the Gaza Strip to three nautical miles,” the ministry said in a statement. “The Israeli minister of defense made this decision after a missile attack on the territory of the State of Israel.”

Last time Israel’s authorities closed the Erez Crossing from September 5 to 13 and the Kerem Shalom Crossing for a month until August 15 in response to clashes and disturbances along the border with the Gaza Strip. In mid-August, following a short period of inactivity on the border, the Israeli Ministry of Defense increased the fishing zone for the Palestinian fishers in the Mediterranean Sea from six to nine nautical miles (from 11 km to 16.5 km).

On Wednesday night Palestinian radicals launched a missile out of the Gaza Strip on Beersheba, a city of 200,000, in the south of Israel. The projectile hit a children’s bedroom in a house, the army press service reported. The mother of three had taken her family to a bomb shelter before that – right after an air raid warning in the city – so there were no victims. The second missile out of the Palestinian enclave was fired on the north and landed in the sea near Gush Dan, a conurbation in Israel, the Israeli state radio Kan reported.

It has been the first missile attack on Beersheba since August 9, which has not been targeted for four years. The Gaza Strip militants have not launched missiles on the north toward Tel Aviv since the end of Operation Defensive Edge in the Palestinian enclave, which was carried out in July-August 2014 and lasted 50 days.

In response to the missile strikes Israeli fighters “started attacks on terrorist targets in the Gaza Strip,” the army press service reported. The military did not name any other details about the response attack. The radio Kan reported that the strikes were carried out, in particular, on the Rafah city area in the south of the Palestinian enclave, where at least three Arabs were injured.