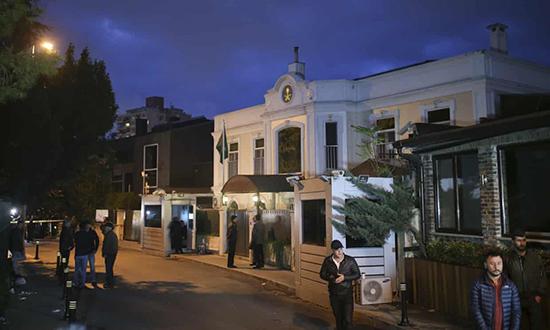 Bethan McKernan in Istanbul and Julian Borger in Washington- The Guardian

Donald Trump has defended Saudi Arabia against mounting international condemnation of the disappearance of journalist Jamal Khashoggi, warning against a rush to judgment as his secretary of state, Mike Pompeo, headed to Turkey to meet President Recep Tayyip Erdoğan.

The US president in an interview with the Associated Press, compared the case of Khashoggi – whom Turkish officials say was murdered in the Saudis’ Istanbul consulate – to allegations of sexual assault levelled against the supreme court justice Brett Kavanaugh during his confirmation hearing.

“I think we have to find out what happened first,” Trump said. “Here we go again with, you know, you’re guilty until proven innocent. I don’t like that. We just went through that with Justice Kavanaugh and he was innocent all the way as far as I’m concerned,” Trump said.

However, Erdoğan has made the international defence of Saudi Arabia harder by revealing that some areas at the Saudi consulate where Khashoggi was last seen alive had been repainted and that toxic materials had been found by police. Turkish sources allege the body was transported to the consul general’s house nearby and disposed of.

Mohammad al-Otaibi, the consul general, has not been seen in public since the scandal erupted. Turkish television and semi-official Anadolu news agency said on Tuesday evening that he left Turkey on a commercial flight hours before his residence was expected to be searched.

Pompeo is to meet Erdoğan and his foreign minister, Mevlüt Çavuşoğlu on Wednesday morning, state department officials said. The initial plan was to meet in Ankara but the latest report from journalists travelling with Pompeo was that the meeting would take place at Istanbul airport.

Earlier, the secretary of state described his day of meetings in Riyadh, with King Salman, Crown Prince Mohammed bin Salman and the Saudi foreign minister, Adel al-Jubeir, as “incredibly successful” because they had each promised to carry out a “thorough, complete and transparent investigation”.

Asked if that might include a member of the royal family, the secretary of state replied: “They made no exceptions to who they would hold accountable.”

Trump’s latest remarks were his most robust defence yet of the Saudis, a US ally he has made central to his Middle East agenda. They put the president at odds with other key allies and with some leaders in his Republican party who have condemned the Saudi leadership for what they say is an obvious role in the case. Trump appeared willing to resist the pressure to follow suit, accepting Saudi denials and their pledge to investigate.

The Oval Office interview came not long after Trump spoke on Tuesday to the Saudi crown prince. He spoke by phone a day earlier with Bin Salman’s father, King Salman, and he said both deny any knowledge of what happened to Khashoggi.

After speaking to the king, Trump floated the idea that “rogue killers” may have been responsible for the disappearance. The president told the Associated Press on Tuesday that that description was informed by his “feeling” from his conversation with Salman, and that the king did not use the term.

Earlier, Erdoğan said: “My hope is that we can reach conclusions that will give us a reasonable opinion as soon as possible, because the investigation is looking into many things such as toxic materials and those materials being removed by painting them over,” he said.

As police vans pulled up outside the consul general’s residence on Tuesday, Pompeo, met for crisis talks in Riyadh with Bin Salman and his father.

At their afternoon meeting at the Royal Palace, Pompeo and the crown prince exchanged smiles and pleasantries about whether the secretary of state was feeling jetlag. Before reporters were ushered out, the prince said: “We are strong and old allies. We face our challenges together.”

After a second session of talks with the crown prince over dinner, Pompeo declared himself satisfied the Saudi monarchy was making a serious effort to find out what happened in the Istanbul consulate.

“During each of today’s meetings, the Saudi leadership strongly denied any knowledge of what took place in their consulate in Istanbul,” the secretary of state said in a written statement. “My assessment from these meetings is that there is serious commitment to determine all the facts and ensure accountability, including accountability for Saudi Arabia’s senior leaders or senior officials.”

Later on Tuesday, the New York Times reported that four of the Saudi suspects had links to the security detail of the crown prince, citing social media profiles, leaked records and use of facial recognition software.

While US media had been reporting that the Saudis were poised to acknowledge that the missing journalist had died as part of a botched rendition attempt, Turkey’s foreign minister, Mevlüt Çavuşoğlu, said on Tuesday that Riyadh had not offered any explanation to Turkey.

Last week, Trump threatened “severe punishment” if it emerged that Khashoggi had been assassinated.

However, the US president said on Monday, without offering evidence, that Khashoggi could have been murdered by “rogue killers”, prompting speculation that the White House may be willing to protect the House of Saud.

But Senator Lindsey Graham, an influential Republican ally of Trump, described the crown prince, known by his initials as MBS, as “toxic” and accused him of ordering Khashoggi’s death. “Nothing happens in Saudi Arabia without MBS knowing it,” he told Fox News, warning that Congress would “sanction the hell out of Saudi Arabia” over Khashoggi’s disappearance.

Turkish officials continued to leak to news outlets on Tuesday that police found evidence in the nearby consulate building during Monday’s search that proved Khashoggi was killed there.

Of particular interest to the forensics team in the new search is the garden, where it is believed the journalist’s remains could have been buried, and a garage under the house, where cars with diplomatic plates spent several hours after driving from the consulate building on the day he vanished. At least four diplomatic vehicles are included in the investigation.

Khashoggi, a prominent critic of the crown prince, relocated from Saudi Arabia to the US last year, where he wrote for the Washington Post. He visited the Saudi consulate building in Istanbul on 2 October for an appointment to pick up documents for his forthcoming marriage.

Turkish officials allege they have video and audio evidence that proves Khashoggi was interrogated, tortured and murdered by a 15-man hit squad sent from Riyadh. Saudi Arabia says the claims are false, although it has offered no alternative version of events.

On Tuesday, the UN high commissioner for human rights, Michelle Bachelet, urged Ankara and Riyadh to waive diplomatic immunity in the case and “reveal everything they know about the disappearance and possible extrajudicial killing” of Khashoggi.