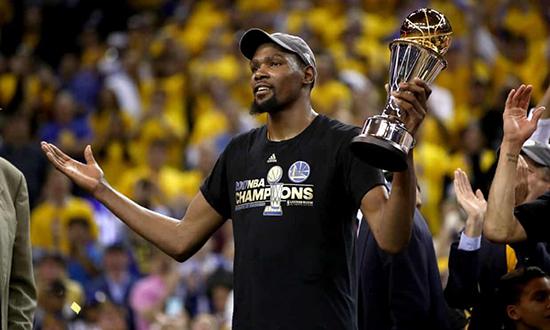 How will LeBron James get on in California? Is Russell Westbrook in decline? Can anyone stop Golden State? Our writers have their say

I’m most looking forward to …

Giannis Antetokounmpo in Mike Budenholzer’s offense. Milwaukee’s new coach will install a system that complements everything the Greek Freak does well – which is practically everything – and mask his one flaw: perimeter shooting. If it works, Antetokounmpo’s surges up the court will resemble an alien attack rather than a basketball offense. OC

What the Boston Celtics look like with the (fingers crossed) fully healthy Kyrie Irving and Gordon Hayward. The Celtics were a game away from the NBA finals last season despite missing their two best players. Now, the team’s young stars have impossible-to-overstate postseason experience, Irving and Hayward are coming back and have no LeBron James in their path. They could be something special. HF

The partnership between Joel Embiid and Ben Simmons blossom. Basketball is most pleasing as a sport of combinations, and in Embiid and Simmons the 76ers have two players of contrasting styles, both on the brink of superstardom, who combine to devastating effect. Embiid has just enjoyed his first injury-free offseason, and if Simmons can discover that elusive jump shot, they will be terrifying to play against. AT

What, if anything, stops the Warriors?

The Warriors! More specifically: their chemistry. Something was funky about the team last year, and they looked, dare I say it, bored at times. Chucking DeMarcus Cousins on top of that could go one of two ways. Either they galvanize behind the big man, gel quickly, and blitz everyone before them. Or, they moan how tough it is to be great, gel slowly … and then blitz everyone before them anyway. OC

Injuries. Should they lose Steph Curry or Kevin Durant, there’s a chance that the Houston Rockets, LeBron James’s Los Angeles Lakers and maybe even the Boston Celtics – in the finals – could stop them. HF

Injuries, obviously – in particular to Curry, in whose absence at points last season the Warriors still managed to be good, but not as effective, somehow not quite as Warriorsy, as when Curry plays. Draymond Green is also showing signs of wear. The Warriors’ biggest enemy, though, won’t be any particular opponent but the simple lethargy that comes with success. What I mean by all this is that nothing can stop them. AT

A new winner in the East. Duh. That is unless you count what LeBron is doing off the court: social justice, Hollywood, and everything in between. Talking strictly basketball, Boston, Toronto, Philadelphia, and Milwaukee now get to play for the honor of losing to the Warriors in the finals. Congrats, folks! OC

This may sound weird because he’s headed towards one of the biggest media markets in the world, but he’s not going to be the center of the basketball world’s attention anymore. In fact, that may be the appeal of the move for him. In Cleveland and Miami, James was the biggest celebrity in town, in LA he’s just another ridiculously famous person. Plus, his team are no longer prohibitive favorites to win the conference. It’ll be interesting to see how he performs under (somewhat) lowered expectations. HF

The boost to the off-court careers of the players he picks to star alongside him in Space Jam 2. Brandon Ingram will also benefit from growing up next to the GOAT – or his talent will get squashed by the oppressive Lebroncentrism of the Lakers’ offensive plays, one of the two. Sorry, that’s two things. AT

The Wizards trade John Wall or Bradley Beal. Washington should be among the top teams in the East. Only the Celtics, Raptors and Sixers have a better starting one-two punch than Beal and Wall. Still, the combo routinely flatters to deceive, and they haven’t been past the second-round of the playoffs in a weak East. If the Wizards are floundering at midseason, expect trade rumors to swirl around their top two guys. OC

The Cleveland Cavaliers will make the postseason again, on the back of Kevin Love. We’ve forgotten how good a player Love was back when he was toiling with the Minnesota Timberwolves. While he’s older now, it wouldn’t be shocking to see him thrive in a role where he’s the main guy again. The top of the Eastern Conference is competitive, but there’s no reason to believe a lower playoff seed isn’t an achievable goal for these Cavs. HF

This season will signal the beginning of the end of Russell Westbrook. The word “irrepressible” gets overused in sportswriting, but it might have been invented for Westbrook, who throws himself around the court with the vital, lashing energy of a tiger running down the hunt. But he will turn 30 in November, is coming back from the kind of knee surgery that’s often a harbinger of irrevocable decline, and has never really recovered from the pain of losing that Western Conference finals series two years ago. A player who’s delighted and frustrated in equal measure is nearing the end of his time at the top. AT

Which rookie will impress the most?

Luka Doncic in Dallas is the obvious choice, but let’s add some variety. Give me Colin Sexton with the Cavs. In an awful East, someone is going to take the eighth seed. The Cavs have a cast of prideful vets and – as Hunter mentions above – Kevin Love. Sexton will add some sizzle to the dish: think of him as a mini-Russell Westbrook, a fire-breathing leaper with a limited offensive portfolio. Without LeBron, Sexton is going to get all the touches he needs to improve his scoring game. OC

His name is Luka. Yes, I’m among the many who are all-in on Dallas Mavericks rookie Doncic, one of the most intriguing international players the league has seen in years. He’s also in the best spot, working alongside international legend Dirk Nowitzki while under the guidance of head coach Rick Carlisle. Just 19, the reigning EuroLeague MVP may have been the steal of the draft when he fell to Dallas as the third overall pick. HF

Mohamed Bamba. A 7ft center playing for the Orlando Magic in his rookie year: we’ve been here before, of course, and if Bamba can have even half the career of Shaquille O’Neal he’ll be remembered as a very good player indeed. Few expect Bamba to have the same impact this season as fellow rookies Doncic or Deandre Ayton – he’s still growing into his frame, and is certainly not the built-for-immediate-domination force of nature O’Neal was at the same age. But a string of encouraging pre-season performances suggests his adaptation to the rigors of the NBA may be ahead of schedule. AT

Your MVP will be …

The Greek Freak. Antetokounmpo has the narrative (new, improved, unleashed), will stack up the necessary wins, and will post the gaudiest of gaudy stat lines. There’s no voter fatigue either, as with LeBron, Kevin Durant, and Steph Curry. Anthony Davis deserves a mention, too. He will offer everything Antetokounmpo will, and then some. Unfortunately, the Pelicans aren’t going to post enough wins. OC

Giannis Antetokounmpo. There are so many possibilities: LeBron is the best player in the league every season until proven otherwise, James Harden is the reigning MVP, the Warriors have two candidates in Kevin Durant and Steph Curry. However, every few years there’s a player with practically limitless potential who elevates his game. This could be Antetokounmpo’s year. HF

Kawhi Leonard. The two-time defensive player of the year has a lot to prove this season, having missed all but nine games last term with a quadriceps injury. With the Raptors’ bogeyman – LeBron – gone, things have opened in the Eastern Conference and Leonard is primed to send a new-look Raptors setup deep into the playoffs. AT

Philadelphia 76ers over Boston Celtics 4-3 AT

Golden State Warriors over Boston Celtics, 4-2. The Celtics are deeper than everyone in the East, have the best defense in the league, and their best players – Kyrie Irving and Gordon Hayward – are returning to the court. That’s before you even get to the development of Jayson Tatum. Ultimately, though it will be for naught. No one can stop the Warriors juggernaut, not until Kevin Durant flees town at the end of the season (that’s not wishful thinking). The Celtics will give us a glimmer of hope, but this is the Warriors world, and we’re just living in it. OC

Golden State Warriors Over Boston Celtics, 4-2. At the dawn of the preseason, several Celtics players were confident that they could beat the Warriors in seven games. That, of course, is what you want your players to say. They’re capable of pushing the Warriors hard in the finals, but they’re not winning four out of seven. HF

Golden State Warriors over Philadelphia 76ers, 4-2. I’m picking the 76ers to make the finals because it’s good to have dreams in life. I’m picking the Warriors to beat them and three-peat because dreams are there to be crushed. AT