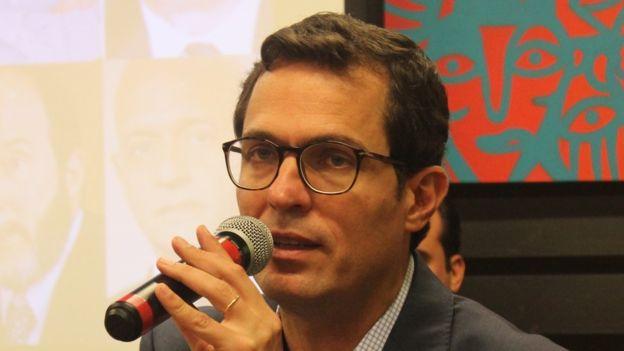 Business people who are sick of corruption in Brazil have come together to school a new generation of politicians.

They set up a group called RenovaBR, based in Sao Paulo, which has so far had 16 of its “students” elected to national and state legislative bodies.

Three of those students were elected to Brazil’s Congress in the latest general election.

Brazil has been rocked by a series of high-profile corruption scandals in recent years.

In the Odebrecht scandal, which the US Department of Justice called “the largest foreign bribery case in history“, investigators uncovered payments from the Brazilian construction giant to dozens of politicians.

The firm had even developed software to help make those payments more efficient.

In December 2016 Odebrecht and Braskem, a petrochemical company, paid $3.5bn in fines.

Dozens of other companies have been accused of illegal donations to politicians in Brazil: typically a large amount of money, which could be from corrupt sources, is used to fund lavishly expensive political campaigns. This makes it very difficult for newcomers to successfully run for office.

Incumbent politicians also have immunity from prosecution for most criminal offences, so unless they are voted out, there are very few options to replace them.

Eduardo Mufarej, a young entrepreneur with a successful career in private equity, came up with the concept of RenovaBR (“Renew Brazil”), an unusual mixture of social movement and training course.

“We know very high quality individuals that have graduated in places like Oxford and Harvard, and even people without such formal education, but that have extraordinary paths and careers. These are the people who should be our representatives”, says Mr Mufarej.

More than 4,000 people applied for the course he set up.

RenovaBR analysed CVs, ran background checks and interviewed candidates to make sure they fitted the profile of the “new politician” they were looking for.

Only 133 were selected for the latest courses, which ran from January to June.

“We needed to see three things in our candidates,” Mr Mufarej says.

“First of all, resilience: someone who has gone through things in life and hasn’t given up.

“Second is a history of delivering, and not just talking. We need people who can roll up their sleeves and get things done.

“And the third is the willingness to serve. People need to understand that when they are elected for office they are being hired for a job.”

Mr Mufarej brought in specialists to teach courses such as how to run a campaign in the digital era, how to recruit and lead teams, and how to get laws approved in Brazil’s byzantine legislative system.

In total, students went through 220 hours of classes.

Next month the 16 politicians that got elected with the help of RenovaBR will take a new course on how to transform their ideas into practice.

The new politicians had to be extremely driven to achieve what people in RenovaBR call “the little miracle” of being elected in a game that favours old hands.

This was the case for Alessandro Vieira, a police chief from Sergipe who ran for senator against the very same governor who fired him.

Mr Vieira was sacked a year ago after his team uncovered a massive corruption scheme involving rubbish collection contracts.

“I ran for senator against the sitting governor, a senator who had been 24 years in office, the leader of the current government in Congress, the president of the traditional Workers’ Party and a popular church leader,” says Mr Vieira. “Their campaigns combined cost over 8 million reais (£1.6m). My campaign cost 80,000 (£1,600)”.

Mr Vieira fits a profile that has good potential with voters: he had tried to tackle corruption and lost his job in the process. But he lacked experience and funding.

At first Mr Vieira tried using Facebook posts but decided it was not working. So he produced low-budget videos with simple messages instead. RenovaBR helped him put together a team of 2,000 volunteers who spread his videos online.

It paid off and Mr Vieira won, gaining almost half a million votes.

In the Northernmost state of Roraima, she works as a lawyer and activist for the preservation of indigenous Brazilians in one of the most conflict-stricken areas of the country.

Ms Wapixana was asked by a local council of indigenous people to run for office but she had no idea how to organise a campaign. RenovaBR helped her get the votes needed.

She says a new course will give her tools in her fight against mining projects that have been moving into indigenous lands in the Amazon region.

“Now I know exactly all the anti-indigenous bills that are already going forward in Congress and I can effectively work against them.”

Despite its intentions to renew Brazilian politics, RenovaBR also represents a continuation of some old traditions.

Out of 16 politicians, only one, Ms Wapixana, is indigenous, and there are only three women in the group. The overwhelming majority of politicians are men from the rich Southern states.

There is also a pro-business bias – with half of the elected belonging to Novo, a party formed largely by entrepreneurs.

Mr Mufarej acknowledges RenovaBR’s shortcomings and says this is just the beginning of the project.

In future elections he hopes to get a more diverse mix of candidates.

Also he is keen to stress that MPs will have complete freedom to act according to what they promised their voters – and not as a sort of lobby group for the entrepreneurs behind RenovaBR.

Also there is no way to secure that all 16 politicians will live up to their promise of renewing politics.

“Their only commitment to us is to complete their terms, to act with transparency and responsibility. If they don’t, they may get a call from me soon,” he says.