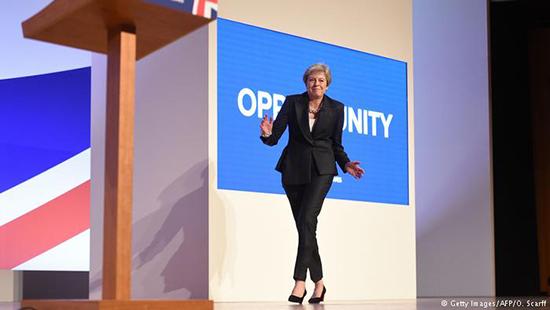 Theresa May gets one more monologue. With a Brexit deal uncertain, she can’t expect much applause from the EU. The European Union, DW’s Bernd Riegert reports, is looking ahead to the next act of the drama in November.

Raise the curtain for the grand finale of the Brexit drama, which has been keeping the European Union — but mainly the United Kingdom — in suspense since the referendum in June 2016.

Ahead of Wednesday’s summit in Brussels, British Prime Minister Theresa May will have 15 minutes to persuade the 27 other EU heads of state and government that her version of Brexit is the better one. It’s important to keep a cool head, she told the House of Commons. According to British media, May hasn’t prepared new propositions. Debates and negotiations are not planned. The prime minister is scheduled to leave before dinner is served.

Only then will May’s foil, EU negotiator Michel Barnier, take the stage to summarize his view of where the Brexit talks stand. The 27 EU member states will assure one another that they all want a tidy exit deal with the UK, but are not willing to sacrifice such fundamentals as the bloc’s internal market. For dessert, it’s time to decide whether the drama is to continue for another act — i.e., whether there should be a special summit in mid-November on the exasperating Brexit issue.

Next act in November?

Though May believes that the EU and her negotiators are close to a deal, officials in Germany and France assume that there will be another act to this drama in November.

Whether a solution comes about in November or not, Republic of Ireland Prime Minister Leo Varadkar has already brought up the possibility of yet another summit in December. The European Union is “relatively relaxed,” a senior EU diplomat said, adding that the bloc would continue to negotiate “until the British end the whole thing.” Britain’s Parliament would still have to approve the accord.

At the moment, May, whose government depends on an alliance with Northern Ireland’s Democratic Unionist Party, has no easy route to a majority for any of the Brexit treaties so far proposed. And yet the UK is scheduled to exit the EU at midnight Central European Time on March 29, 2019 — 11 p.m. March 28 in London.

The representatives of various EU governments say the bloc is prepared for the possibility that the drama could conclude in a bitter dispute and with no agreement at all — even after three, four or five acts are tacked on to the production. At Wednesday’s summit, European Commission President Jean-Claude Juncker is scheduled to give a speech on the topic. Border controls and customs posts are being prepared in the ports of northern France and at the Channel Tunnel, France’s European affairs minister said.

Britain’s government is also preparing decrees and handouts for companies in case of a “no deal” scenario. Officials from both Britain and the EU stress that they would prefer a treaty. The bloc’s version would include a two-year transition period, regulate the rights of British citizens in the EU and EU citizens in the UK, and have the United Kingdom ponying up a €39 billion ($45 billion) settlement bill.

Currently, each side is playing up the drama to impress the other. Who will blink? A draft agreed to by negotiators over the weekend was immediately refused in London. Officially, there have been no negotiations since then. Behind the scenes, however, the teams are still drafting the cript.

The border between the Republic of Ireland, in the EU, and Northern Ireland, in the UK, is the pivotal plot point. All actors would like for it to remain invisible so as not to endanger the peace in Northern Ireland. The EU has proposed keeping Northern Ireland in the bloc for the time being and drawing a new border in the sea between Northern Ireland and the UK, a suggestion May refused, invoking the unity of “our kingdom.” May wants the UK to have continued access to EU trade and to avoid the imposition of a border entirely. Whether that would be permanent or limited is also a matter of dispute, as is the question of whether the treaty should contain an unlimited insurance clause — the Irish border Brexit backstop — for the Republic of Ireland and Northern Ireland if the EU and the UK do not manage to achieve a new trade agreement.

Critics of the drama, such as the Brussels-based BusinessEurope lobby group, charge that it would be in no one’s interest to let Brexit go ahead on March 29 without a treaty. “The closer we get to the exit date, the more urgent it is to come up with a treaty that stipulates a transitional period,” said Pierre Gattaz, BusinessEurope’s chairman.

Or, as Joachim Lang, the director general of the Federation of German Industries, put it: “Fear of the abyss” should be the actors’ inspiration.