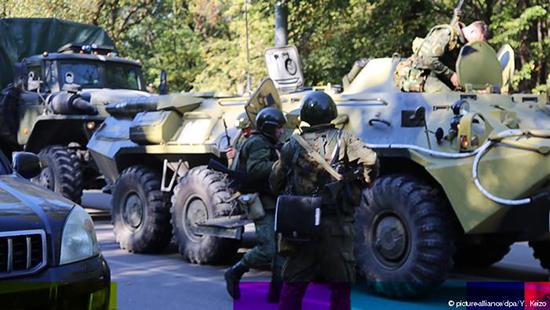 An attack at a college in Russian-annexed Crimea has killed multiple people, mostly teenagers. Russian investigators have called it a case of mass murder.

At least 19 people were killed in a suicide attack at a techincal college in Russian-annexed Crimea on Wednesday, local authorities said.

Crimean leader Sergei Askyonov said a student had carried out the attack in the port city of Kerch before shooting himself. Aksyonov also announced three days of mourning starting Thursday over the “terrible tragedy”.

The Russian Investigative Committee called it a case of mass murder and named 18-year old student Vladislav Roslyakov as its chief suspect.

An explosion went off at about midday (0900 UTC/GMT), caused by a bomb packed with metal objects and was set off in the cafeteria, investigators said.

Witnesses said that the attacker fired shots. A student at the college who asked not to be named told AFP: “I was in a class when I heard shooting on the first floor.”

“When we all ran out into the corridor, there were others running and shouting that some guy with a machine gun was randomly shooting everyone in turn.”

Another witness who said his name was Sergei and who worked nearby said in a video on the Kerch.tv website that he heard “a bang and shots.”

Russian President Vladimir Putin, who was in the Black Sea resort of Sochi, said in televised comments that a “tragic event” had happened.

“It’s already clear that it’s a crime, the motive and possible versions for this tragedy are being carefully examined,” Putin said.

“I want to express condolences to the relatives of the dead and express the hope that the injured recover as quickly as possible,” the president said, calling for a minute’s silence to mourn the victims.

Kerch sits on the western end of a newly built bridge linking Russia to Crimea. Russia took Crimea over by force after Moscow-friendly Ukrainian President Viktor Yanukovych was driven from power after pro-European protests in Kyiv in 2014.